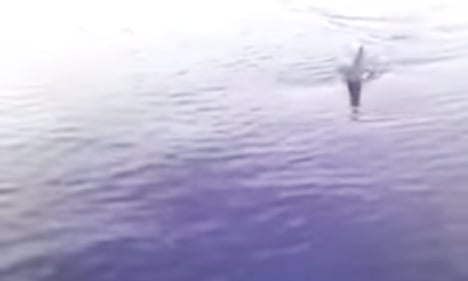 The shark was spotted by a group of amateur fishermen. Screengrab: Agrigento Press/YouTube

The giant fish was spotted around ten miles south of Porto Empedocle in Agrigento by a group of amateur fishermen, La Repubblica reported.

In the video, which is eerily reminiscent of the shark in the horror film ‘Jaws’, the predator’s fin is seen breaking the surface of the water as it rapidly approaches the boat. The shark then flicks its tail and disappears.

Naturalist Antonio Vanadia told the newspaper that there were no doubts about it being a great white shark.

“You can definitely tell from the shape of its fin, its size and its behaviour,” he said.

But Vanadia added that there was no reason to panic.

“They are not common here, like they are off the coast of South Africa and Australia. They are in the Canale and they have a precise role in the food chain of the Mediterranean.”

Although the population of great white sharks in the Mediterranean would appear to be small, there have been several shark attacks and even fatalities reported in Italy.

In 1989, Luciano Costanzo was killed by a shark, probably a great white, off the coast of Piombino, in Tuscany. The 47-year-old had been scuba diving and spear-fishing with his 19-year-old son and a friend.

The other two men were still in the boat when a shark reported to be at least 20 feet long got its jaws around Costanzo’s torso.

The father screamed for help and tried to make it back to the boat, but the shark attacked him viciously.

“I clearly saw my father in the mouth of the shark,” his son, Gianluca, later said.

“The water became red with my father's blood.”

Three days afterwards, a team of divers looking for his remains found only his flippers, weight belt, and two scuba tanks with bite marks in them.

It remains to be seen if the latest sighting will affect the popularity of Empedocle’s sandy beaches.