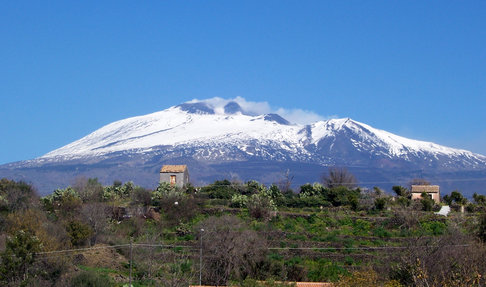 Would-be mountain climbers with an internet connection can now virtually explore the highest active volcano in Europe, without experiencing any of the cold, strain and danger that goes with it.

Thanks to a 360-degree horizontal panorama and a 280-degree vertical panorama, the digital explorer can see the tendrils of volcanic steam drifting over the camp, as well the dirt paths that lead to and from it. Looking down from the 3350-meter giant, clouds are visible far below.

Taking high-resolution images on a volcano is no easy feat. The stunning photos were captured by an intrepid explorer who climbed the mountain wearing a Google-designed backpack with a camera attached to the top that takes photographs automatically.

Mount Etna is one of the most active volcanoes in the world, prone to dramatic explosions at the summit and dangerous lava flows from the mountain’s flanks.

In July 2001, a lava flow about 500-feet wide destroyed the car park and cable car of Rifugio Sapienza, a tourist resort near the mountain, and came to within about 165-feet of the resort itself.

Digital exploration is, therefore, a much a safer option.

But Etna is by no means the only mountain on Google Street View. Armchair explorers can also visit the National volcano Park of Hawaii and the base camp of Everest.