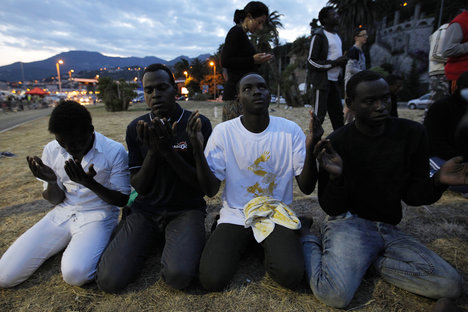 “It all depends on your mind. If you know really you can do it, it is possible.”

Now Eyube has been given his chance to prove to the world that his self confidence is justified.

Eight months after he landed in Italy, the 34-year-old is one of the stars of a new production that has brought the epic drama of migrants' journeys from Africa to Europe, across the Sahara and the Mediterranean, to the Italian stage.

Asylum-seekers make up 20 of the 30-strong cast of “Sabbia” (Sand), an original piece conceived by director Riccardo Vannuccini that emerged from a six-month theatre workshop run by the ArteStudio company in the Castelnuovo di Porto reception centre on the outskirts of Rome.

Sabbia had its first two showings at the weekend in Rome's prestigious Teatro Argentina and there are plans to take it around a country grappling with the pressures and polemics generated by the arrival of unprecedented numbers of migrants on its southern shores.

Eyube, like nearly all the others in the Castelnuovo centre, arrived there after being plucked from a floundering people-smugglers' boat in the Mediterranean.

He grabbed the chance of working with ArteStudio, a company thatspecialises in producing theatre in war zones and prisons and involving displaced people, the disabled and torture victims.

“I never had the opportunity to try theatre or anything like that before,” Eyube said, explaining how preparing for Sabbia had allowed him to offset the tedium of endless days spent waiting for news on the progress of his application to stay permanently in Italy.

His role involves delivering the “To be or not to be,” soliloquy from Shakespeare's “Hamlet” in his rich baritone voice. T.S. Eliot's epic poem “The Waste Land” and the paintings of Jackson Pollock are also referenced in the contemporary production.

Director Vannuccini's CV includes a piece called “Al Hodood” that was produced in Jordan with the help of refugees from neighbouring Syria and a production of “Hamlet” in Hebron, in the Palestinian territories.

He says his latest work is not trying to make any particular point about Italy's migration crisis, instead framing his objective as a greater understanding of the forces driving it.

“This year there will be 200,000 people arriving in Italy, in the coming years it could be a million. It is an epochal event, both for those fleeing and for those at the receiving end.”

Working with the young Africans, he said, had been joyful despite their total absence of performance experience.

“There was some diffidence at first but what we do is not literary theatre, it is more a theatre of action,” he explained. “Our approach, is similar to that in sport, it is about creating a team. And then here is a lot of fun and friendship.”

For Ebuye and the other asylum-seekers in the cast, remembering lines and stage marks help occupy minds that otherwise would be filled with anxiety over the future or haunting memories of the recent past.

“Finding myself here, I am so happy because sometimes when I watch TV I see people in the sea, dead. I jump around because it is the grace of God.”

For Farba Mangane, 22, from Senegal, the mental scars from being forced onto a boat off Libya having never seen the sea prior to that day have healed slowly.

He was so traumatised he has only just recovered the ability to urinate without medication 13 months later.

“(In the centre) I think so much,” he said. “Am I going to get papers, am I going to have any money?” he said. “But since we started this theatre my heart has begun to relax.”