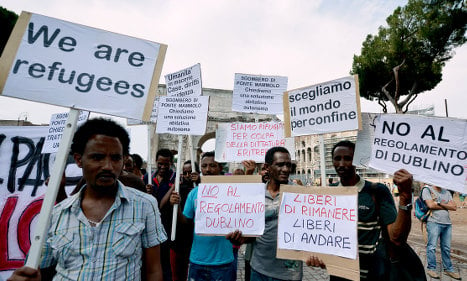 Thousands of people took to the streets in several European cities on Saturday, in a show of solidarity with migrants seeking refuge in Europe and against austerity measures in debt-ridden Greece.

In Berlin, some 3,700 turned out according to local police, while organisers said 10,000 participated in a protest held on World Refugee Day, that had been called by German opposition parties Die Linke (The Left) and Gruenen (The Greens).

In the German capital, protesters chanted: “No frontiers, no nations, stop deportation!” and “Say it loud, say it clear, refugees are welcome here!”

Marching from the bohemian Kreuzberg district to Brandenburg gate, some of the protesters held up flags of Greece and posters bearings slogans supporting Athens, as a critical June 30 deadline in debt talks looms.

Should Greece fail to reach a deal with its international creditors to secure the last tranche of funds from its massive bail-out, it risks defaulting and possibly crashing out of the eurozone.

This “technocratic, cold and neoliberal Europe that is led by Germany is unbearable”, read one poster held up by a demonstrator.

Economic powerhouse Germany is seen by anti-austerity activists as taking uncompromising stances in the debt crises that have hit several European countries.

Elsewhere in France, hundreds gathered in the southern city of Marseille and in Calais, the northern port city used as a springboard by migrants seeking to reach Britain.

In the southeast, activists gathered in Menton near the Italian border, in solidarity with hundreds of migrants stuck in Italy after France refused to allow them in.

In Rome too, scores of protesters braved the rain and gathered under the slogan “Stop the massacre now” to express solidarity with migrants risking their lives to sail across the Mediterranean Europe on rickety, overcrowded boats.

“We are here to save our Europe, which includes immigrants, refugees and Greece. Europe must belong to everyone, not just to the Germans and the banks,” said Luciano Colletta, a 66-year-old pensioner, who stood along with the other protesters in front of the Colosseum.

Some 100,000 migrants have crossed the Mediterranean so far this year, most of them landing in Italy, Greece and Malta which all want their EU peers to share more of the burden.

At least 1,800 people have drowned trying to make the journey.

On Friday, EU member states approved plans to launch the first phase of a military operation against people smugglers in the Mediterranean.

Human Rights Watch said Friday that most migrants who have reached Europe in recent months come from Afghanistan, Eritrea, Somalia and Syria, among the world's worst affected states by war and abuses.