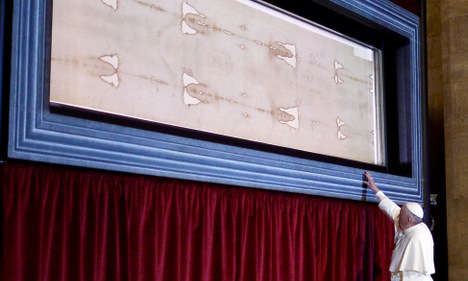 Pope Francis touches the holy Shroud, believed by some Christians to be the burial shroud of Jesus on Sunday in Turin's cathedral. Photo: AFP Photo / Alberto Pizzoli

On the Argentine pontiff's first pastoral visit to northern Italy, Francis — whose father grew up there — was met by crowds of enthusiastic faithful, before making his way to the city's cathedral where the shroud is on display.

Sitting before it in silence, Francis remained with his head bowed in prayer for some minutes, before rising to contemplate up close the linen cloth which bears the faint image of a man who appears to have died by crucifixion.

Radiocarbon dating in 1989 declared the 14 by four foot (4.2 by 1.2 metres) cloth, which has traces of blood and DNA on it, to be around 700 years old. But if it is a fake, international experts have so far failed to discover how it was made.

The Church sidesteps the issue by calling the shroud a religious icon.

The head of the world's 1.2 billion Catholics was in the industrial city in the north-west of the country for a two-day visit which will see him spend time with the poor, sick and marginalised, including prisoners and migrants.

In a speech straight off the plane from the Vatican to the workers of the Piedmont region, the pontiff warned people not to blame those fleeing war and famine for economic difficulties in the recession-hit country.

Migrants should not be “treated like merchandise” he said.

Criminal networks throughout the country have been preying on refugees, exploiting them to pocket government subsidies, while the northern regions in particular have begun closing their doors to asylum seekers.

But those arriving by boat from Libya “draw tears”, Francis said, adding: “If immigration increases competition (for jobs), they cannot be blamed because they are victims of injustice… and wars.”

Nor should locals turn their backs on their own poor, elderly and unemployed, he said, pointing out that 10 percent of the region lives in poverty, while 40 percent of young people are jobless and the elderly feel abandoned.

“We are called to say 'no' to the idolatry of money,” which pushes people to try by any means to get rich despite the crisis, “without caring for the many getting poorer, sometimes to the point of hunger,” he said.

The trip will have a special personal element for Francis, who is set to meet members of his extended family.

The pope's grandfather Giovanni Bergoglio and grandmother Rosa Margherita Vasallo lived in Turin before moving to Buenos Aires in 1929 when their son, Francis's father Mario, was 20 years old.