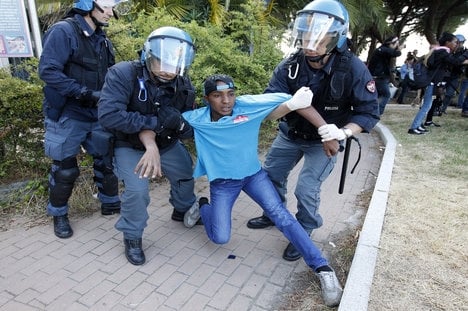 “I don't think there are tensions between us… sometimes ministers can let themselves go with statements, it's like engaged couples who have been together a long time,” Prime Minister Renzi quipped during a joint press conference in Milan.

The leaders were meeting ahead of a European summit on June 25th and 26th which is expected to focus on the relocation and resettlement of asylum seekers and return policies for would-be economic migrants.

Italy, which has seen almost 60,000 migrants arrive this year, has been struggling to accommodate asylum seekers, and the tightening of controls at the French border has left many sleeping rough in the country's main train stations.

Another 740 boat migrants were brought to safety in Calabria in southern Italy on Sunday.

Renzi sounded a firm “no to hysteria”, saying the numbers so far were comparable to last year, but also called for greater European cooperation, saying “no also to selfishness”.

The situation at the frontier town of Ventimiglia, where French police have been stopping migrants from crossing into France, has sparked not only protests but also a heated exchange between the countries' interior ministers.

“The problem is not just in Ventimiglia… it's Europe's problem,” Renzi said.

Hollande stressed the border had not been closed, but strict controls were being carried out on immigrants hoping to pass into Europe via France after washing up on Italy's shores on rickety boats from Libya.

“We are applying the rules,” he said in reference to the Dublin agreement which obliges migrants to apply for asylum in the European country in which they first set foot.

Many migrants hope to avoid doing so as they don't want to stay in recession-hit Italy but hope to reach countries further north with better job prospects.

Hollande agreed that Rome cannot “bear the burden for the others,” indicating that France was ready to help with registering migrants as part of a EU plan to provide shelter to those in need and quickly repatriate economic migrants.