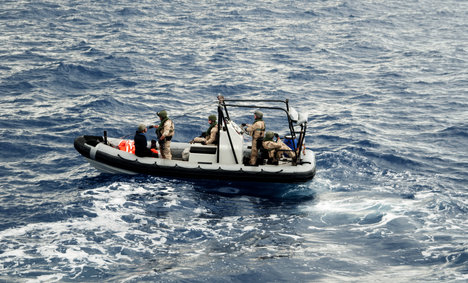 Reports said one migrant had collapsed into the sea and drowned while another, a Gambian national, had been helicoptered by the Italian navy to hospital on Lampedusa, an Italian island located between Sicily and North Africa.

Italian prosecutors in Sicily have opened a homicide investigation against persons unknown. Officials at Libya's coastguard were quoted as denying that one of their patrol boats had been involved in the shooting incident, as was reportedly claimed by survivors.

The incident came as European Union foreign ministers approved the launch of the first phase of a military operation to target people smugglers behind the wave of boat people trying to reach Europe's southern shores from North Africa.

The new naval mission, known as EUNavfor, is set to target traffickers of migrants and will be headquartered in Rome.

The news of its launch was welcomed by politicians in Italy. Italian Defence Minister Roberta Pinotti told the Italian Media, ” The issue of security in the Mediterranean that so far has been a burden on our shoulders is now shared,” Italian news agency Ansa reported.