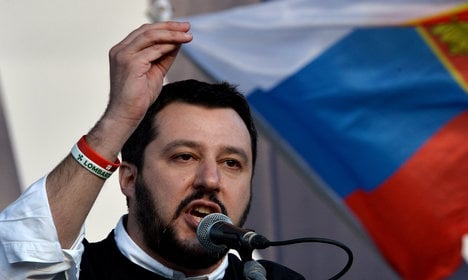 Over the course of a three-hour dinner the pair discussed forming a political union that could challenge the current democratic government of Matteo Renzi.

Speaking after the meeting, Salvini explained the need to form a new centre-right in order to get rid of Renzi and provide an alternative to the Angelo Alfano's New Centre-Right party.

“Italy's problem is Renzi,” The Northern League leader said. “Whoever helps us get rid of him is welcome.”

A new centre-right alliance between the two parties could offer a formidable opponent to the incumbent centre-left government at the next general elections, which are due to be held before 2018.

Over the course of the dinner, Berlusconi tried to convince Salvini that between the two parties they could secure a majority.

Salvini's Northern League has a strong following in the provinces north of the capital, while Berlusconi's Forza Italia has historically polled well in the southern provinces, making a union strategic even if the two parties have not always seen eye to eye.

The dinner at Arcore, once the scene of Berlusconi's infamous so-called 'bunga-bunga' parties, was an informal one and no official pact has been agreed upon. The two parties have flirted with each other in the past, but have never entered into a political union.

Speaking after the meeting, Salvini suggested that that could be about to change. “Even on Europe there are fewer differences than before,” he told the Italian press.

The recent migrant crisis, as well as the ongoing mafia capitale scandal have damaged support for Renzi's centre-left government and caused a surge in support for Salvini's far-right party.