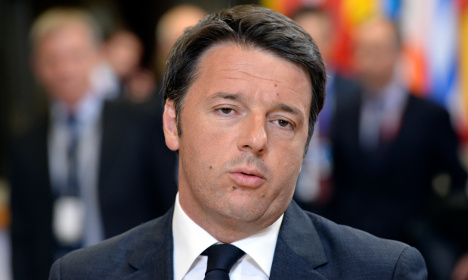 “Europe needs a strategy,” the prime minister said in an interview in La Stampa daily, a day after France clashed with Britain over thousands of immigrants trying to cross the Channel, and Hungary suspended a key EU rule on processing asylum claims.

“A European response is needed above all by Europe, more than Italy,” he said. “We want to fight for a different idea of values, civilisation, peace: that is what Europe was born for. If these values are ignored in front of a Mediterranean in flames, in front of children drowning, Europe loses itself,” he said.

Renzi was speaking ahead of an EU summit on the immigration crisis on Thursday and Friday, which Italy hopes will see the burden of repatriating economic migrants and providing shelter to refugees being shared between the bloc.

Hungary's announcement on Tuesday that it has indefinitely suspended the application of a key EU asylum rule in order “protect Hungarian interests” did not bode well.

France has also fallen out with Britain over vast numbers of illegal immigrants and asylum seekers attempting to cross the Channel.

On Tuesday, some of the thousands of illegal immigrants camped in the French port of Calais took advantage of the chaos caused by a ferry workers' protest to try to climb aboard lorries bound for Britain.

France has said it is being forced to act like a British border patrol and called on London to do more to help.

Renzi has warned the EU not to indulge in hysteria or far-right pandering, saying that around 61,400 men, women and children have been picked up off boats so far this year — only slightly up on the numbers at the same time last year.

Defying Italy's own anti-immigration Northern League party, he said Italy could tackle the situation in the Mediterranean alone if necessary, insisting “we will not give up on saving one single life: a life is worth more than a poll”.

But he warned Europe against allowing “walls of indifference” to spring up.

“For us, in Italy, Europe is this: a lighthouse of civilisation, not a wall of fear.”