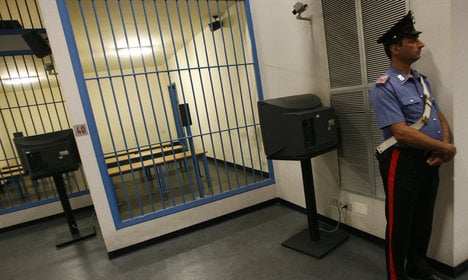 But the one-time petty criminal, who became a player in the island's brutal mafia wars of the 1980s and early 1990s, expresses no remorse for his crimes.

“Pippo”, now 50, says they were necessary for his own survival and is resigned to spending the rest of his life in jail.

In the visiting room at Sulmona prison in Italy's mountainous Abruzzo region, he greets callers with a steely gaze and recounts his blood-stained life in unflinching fashion.

Between 1991 and his arrest in November 1992, Grassonelli was a leading figure in La Stidda, a group which emerge in the 1980s as a splinter from and rival to Cosa Nostra, thelong-established Sicilian mafia.

At the time, internal mob rivalries were claiming hundreds of lives per year on the island. He hides nothing: he killed or organised killings, time after time, because, he says, he had no choice.

“They killed my grandfather, my uncles, my cousins. Four times they tried to kill me,” he told AFP.

Barely in his teens when he took part in his first armed robbery, he was sent at 17 to Germany, where a Hamburg-based friend of an uncle taught him how to rig poker games.

The youthful Pippo had a talent for cheating at cards and the cash began to flow, funding a lifestyle of women, cocaine and BMWs pushed to their limits on the autobahns. “For me that was life, the wonderful life,” he recalled.

The idyll was interrupted on September 21st, 1986 when Grassonelli's grandfather and five other relatives were killed in an attack which, he writes in the book, had it origins in a dispute between two families over a broken-off engagement.

At home for the summer, he escaped with a bullet wound to a foot and retreated to Germany to plot revenge, after his father told him that two prominent Cosa Nostra figures were toblame.

Money and arms were arranged for allies organising on theisland and, a few years later, he returned as the alleged head of his own clan of malcontents.

“Giuseppe Grassonelli was clearly the most intelligent member of the group. It was he who changed the killers' way of operating,” said his co-author Sardo.

The new boss's trademark became assassinations carried out by killers dressed in suits and ties rather than masked men on motorcycles.

Today, he insists that his victims were all mafia mobsters out to kill him and that, in the Sicily of the time, going to the police was not an option.

That does not mean he does not reflect on the past. “Nobody wants to be in a war, all it is is shit and blood,” he said. “And the ghosts of it haunt you all your life. I would never do again what I have done,” he added

Grassonelli was arrested on November 15th, 1992 after he was betrayed by someone close to him. As a man steeped in Sicily's centuries-old culture of honour and omerta code of silence, collaboration with prosecutors was never an option.

“I did not believe in the state,” he explained. “Now yes, but what good would it be for me to inform on anyone else now.It would only be a humiliation, they know everything that happened.”

That stance means Grassonelli will likely die in prison, a prospect to which he appears reconciled to since he refused to have a lawyer at his trial or appeal his sentence.

His rehabilitation began on the night he was sentenced when he discovered, in a dirty, freezing cell, a copy of Leo Tolstoy's “War and Peace”.

For the then barely-literate man who spoke only his local dialect and was facing perhaps half a century behind bars, it was an epiphany.

After three years in solitary confinement and five years of what he terms “torture” in the same cell as his father, the conditions of his imprisonment were gradually relaxed.

He passed his school leaving certificate, studied philosophy and became a model prisoner, eventually obtaining a Master of Arts degree with distinction.

“Now I would like to write other books,” said this unusual prisoner who likes to quote “dear old Nietzche” and raves about the Greek philosophers.

“They'll be novels, not philosophical essays because that doesn't sell. People always prefer food, sex and violence,” he said.

He has finished a draft in which the hero of “Malerba” gets out of prison: pure fiction since there is no prospect of it happening in real life.

“I don't try to justify myself, I am paying my debt,” he said. “I have been in prison for 23 years and I know I will die in prison while people who have killed hundreds of people or dissolved children in acid are free because they collaborated.