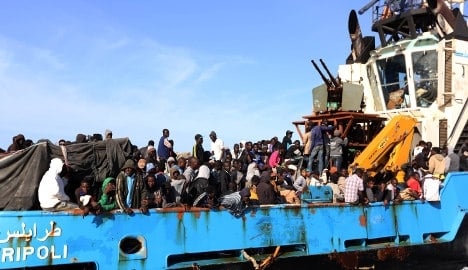 A Libyan coastguard boat carrying around 500 migrants arrive at the port in the city of Misrata on May 3rd, 2015. Photo: Mahmud Turkia/AFP

“We're living a genocide, and in a few years we Europeans risk being found responsible,” Palermo's mayor Leoluca Orlando said in reference to the 1,800 or so people who have died attempting to cross the Mediterranean by boat this year.

Orlando said Europe should make it easier for asylum seekers to apply for refugee status outside the EU, after which they could enter the bloc legally rather than having to place their fate in the hands of people traffickers.

“If Syrians, coming from a country at war, have the immediate right to refugee status, why stop them taking a plane ticket from Istanbul to Paris, for example, and oblige them to go via Libya and the Mediterranean sea?” he asked.

Orlando, whose city in the north west of Sicily has had to deal with a fair number of the over 60,000 people who have arrived in Italy so far this year, said many of the tales migrants have to tell were hair-raising.

Orlando was in Rome for a meeting between Prime Minister Matteo Renzi and the country's regional heads on the question of giving shelter to migrants, after areas of the rich north in particular said they refused to take in any more migrants.

Renzi called for “ethical and reasonable” solutions to the problem, saying refugees must be cared for and economic migrants quickly expelled — without explaining how the country would speed up its identification processes.

The talks were slammed as a waste of time by the president of the Lombardy region, Roberto Maroni, who told his Northern League anti-immigration party that “the chaos continues”.

His counterpart in the Veneto region, Luca Zaia, called on his prefects “not to answer the phone anymore when the government rings.”