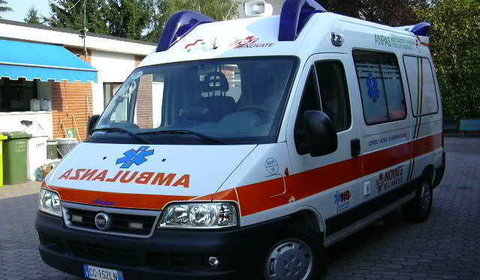 Ambulance driver Massimiliano Ceci was transporting a 91-year-old woman with a suspected stroke to the San Paolo di Civitavecchia hospital with his colleague Dario Mastrodonato when he started to feel unwell.

“On the motorway I felt a weight on my chest and a pain in my left arm. I turned around and told Dario: ‘I don’t feel well, but I can still make it,’” Ceci told Corriere della Sera.

But the ambulance crew made it to the hospital, where Ceci collapsed upon arrival.

Ceci, who has been driving ambulances for 27 years, is now being treated at the Santo Spirito hospital in Rome after undergoing angioplasty, the surgical repair or unblocking of a blood vessel.

“I’ve seen many incidents like these. I recognized the symptoms almost straight away, but to experience them first hand is another thing,” he told the paper.

The head of the ambulance service praised Ceci’s dedication to his work and for putting the patient’s life before his own.