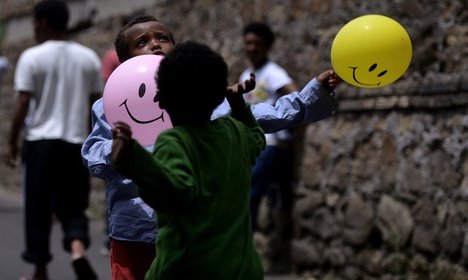 Standing amid piles of shoes, t-shirts, pyjamas and baby bibs, Susanna Steri describes how she had to ask the inhabitants of Carbonia to stop bringing donations for the 90-odd men, women and children from Sierra Leone and Nigeria.

“We only had a few hours notice to prepare,” Steri told AFP, describing the weekend of May 30th, after distress calls made from 22 boats in the Mediterranean led to the rescue of 4,200 migrants, and the discovery of 17 bodies.

Steri was told that of the 900 people being brought to the island, the ENAP centre — once used to teach youngsters traditional trades — would be receiving 90 in need of emergency housing, including a four month-old baby.

Just a few kilometres inland from golden beaches where tourists dock their yachts to paddle in crystal waters, the unemployed rolled their sleeves up.

“It's difficult to describe what happened, the real difficulty was finding place for all the volunteers, not the migrants,” she said, as another local couple arrived bearing boxes full of biscuits, baby food, fruit and milk.

The collapse of the area's coal mining industry, followed in 2012 by the closure of the Alcoa aluminium smelter, has driven youth unemployment in the Carbonia-Iglesias province in south-west Sardinia to a towering 73.9 percent.

But while Lombardy, Veneto and Liguria in the country's wealthy north refuse to take in any more migrants — with rich Val d'Aosta accepting just 62 – locals here are buying the refugees cigarettes and phone cards out of their own pockets.

The centre expects to receive €35 ($39) a day per migrant from the state, including two euros for pocket money, but pensioner Giulio Cadeddu, ex-financial policeman turned volunteer, says red tape means they won't see a cent for months.

“We're trying to do the impossible, how could we not for such sweet creatures?” he says looking at a grinning Fatima, who celebrated her first birthday here, and whose colourful balloons still adorn the dining room.

Nearby, seven-year old twins from Sierra Leone wolf down pasta and chips and chatter excitedly as translators tell them plans are underway for volunteers to put on a summer party in the garden, complete with inflatable games and a clown.

The town's 30,000 inhabitants know the challenges of starting life somewhere new: Carbonia was built by Fascist dictator Benito Mussolini in 1938 to house coal miners, and many of its residents hail from Puglia, Sicily and Veneto.

The asylum seekers are being absorbed into the local poor, Steri has a deal with priest Don Amilcare, who prepares 200 meals for the local needy. If either group has leftover bread, fish or other foodstuffs, they are shared out.

A washing room in the centre is crammed with bottles of donated shampoos, shower gels, soaps, toothpaste tubes andnappies.

But despite their efforts, many of the refugees are unhappy, believing they would be better off on the mainland in big cities where they could look for work.

“The people here are the most wonderful I have ever met in my life,” said 32-year old Rosalin from Nigeria, who fled Maiduguri for Libya when jihadist group Boko Harem bombed her shop, and paid a trafficker for a place with her family on a dinghy headed for Italy.

“My husband died during the crossing. I am pregnant and it is by the grace of God that we are here. But I need a transfer to a place that is more developed,” she said, as her brothers-in-law spent another day doing nothing.

Lamin Johnny, a 35-year old from Sierra Leone who is married to one of Rosalin's sisters, said he had “looked for work since we arrived, but nothing”.

Of the 90 migrants originally brought to the centre, only 48 remain, and the others are believed to have headed off in search of places with better prospects — no mean feat in Italy, a country struggling to shake off a profound recession.

It is a situation with which the unemployed factory workers from the Alcoaplant sympathise, though even they have pitched in with caring for their new neighbours.

“And why wouldn't they? It's only the rich who are afraid of losing, the poor have nothing to fear,” Steri said.