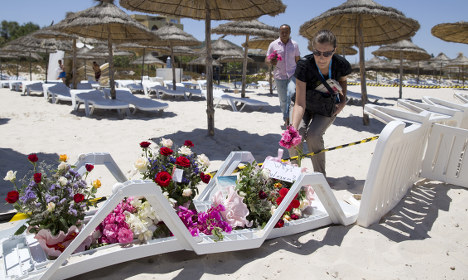 People lay flowers at the site of the shooting attack on the beach on the outskirts of Sousse in Tunisia. Kenzo Tribouillard / AFP


“No country is without risk, we have raised the level of alert to re-sensitise those units charged with protecting sensitive places,” Interior Minister Angelino Alfano said.

“Today has seen three attacks with dozens of dead carried out in three different places around the world, linked by one thing: violence and terror,” he said.

Italy had raised its alert level to the third-highest in January, after the jihadist attacks in Paris.

Alfano did not specify to what grade he had increased the level on Friday, after a massacre at a beach resort across the Mediterranean in Tunisia and a grisly Islamist attack in southeast France.

At least 37 people were killed and 36 wounded when a gunman opened fire on holidaymakers on a beach in the Tunisian resort town of Sousse.

Meanwhile in France, a businessman was found decapitated with Arabic inscriptions on his body at a gas factory near Lyon, while further afield in Kuwait, a suicide bombing at a mosque claimed by Islamic State jihadists killed 25.

Alfano shot down claims that would-be jihadists may be entering Italy via migrant boats crossing the Mediterranean from Libya, hidden among the over 60,000 people who have washed up on the country's shores so far this year.

“We will win the terror challenge only if we do not allow ourselves to be conditioned by fear,” he said, adding that “there is no proof that there has been a rise in crime as a consequence of the rise in immigration”.

Earlier Friday, a Pakistani accused of organising a 2009 bomb attack on a Peshawar market that killed more than 130 people was detained in Italy.

Italian anti-terrorism detectives believe the man to be part of a jihadist network based in Italy, which was plotting terror attacks on Rome and possibly the Vatican to be carried by suicide bombers from Pakistan.