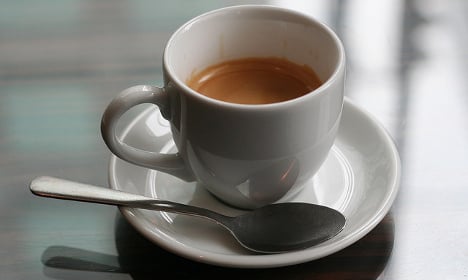 The tourist's coffee had been drugged with benziodiazepines, a class of psychoactive drugs sometimes used as a sedative. Photo: Michelle Tribe

The tourist, 33, and his wife, 35, were reportedly approached by a man outside the train station on piazza Garibaldi, Il Mattino reported.

The man offered them a coffee, which the male tourist graciously accepted, and the three went into a bar.

But unbeknownst to the tourist, their new friend had added a strong sedative to the drink, causing him to fall unconscious.

Pushing the woman to the ground, the thief then grabbed her purse and fled.

The woman was able to raise the alarm by shouting and the police found the suspect hiding behind some cars in a courtyard.

The bag was returned to the woman, who was then taken to the police station where her husband was lying unconscious.

The couple were taken to hospital, where the woman was treated for bruising and the man was found to have been drugged with benziodiazepines, a class of psychoactive drugs sometimes used as a sedative.

The thief was identified as 40-year-old Luigi Esposito from Ponticelli, an eastern suburb of Naples. He was found to be in possession of the drug and was promptly arrested and taken to Poggioreale prison.

Esposito was also arrested in July 2012 for a similar robbery involving sedatives, according to the paper.