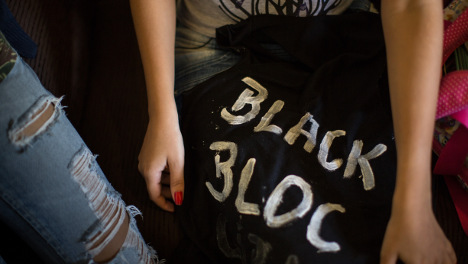 The T-shirt the pensioner was wearing bore the same colours as the one worn by Blac Bloc protesters. Photo: Yasuyoshi CH / AFP

Deaf and mute pensioner, Giovan Giuseppe Nasti, was visting the fair with Korean friends when he was stopped at the entrance by Expo staff, who thought he belonged to the Black Bloc anti-capitalism anarchist group because the black and white T-shirt he was wearing bore the same colours as the one worn by members of the group, Corriere Della Sera reported.

But the garment the 75-year-old was wearing was far from an anarchist statement. In fact, it contained the words ”No deaf - No Expo” in white writing.

The T-shirts have been made by the national institute for the deaf (Ens) for some time, and are part of the institute's repeated complaints that the Milan Expo lacks appropriate signage for those hard of hearing: complaints that have ironically fallen on deaf ears.

Corriere surmised that the staff could have mistaken the sign language of the group for some kind of anarchist code. Either way, all three of them were stopped, identified and then asked to remove their T-shirts, which were confiscated.

Quite what disruption Expo staff thought the pensioner from Naples and his friends were going to unleash upon the fair is unknown. Although staff did succeed in intimidating the potential anarchists.

“My Korean friends feared they were going to be arrested,” Nastri told the newspaper.

The president of Ens Lombardy, Mara Paola Domini, said she was taken aback with the heavy-handedness of the Expo staff, adding that plenty of people had already visited the fair while wearing the T-shirt without problems.

Admittedly, the Black Bloc is a sensitive issue for Expo. In May, violent protests led by anarchist groups overshadowed the opening of the Expo – an event which the Italian government hopes will boost the economy and improve the countries national standing.