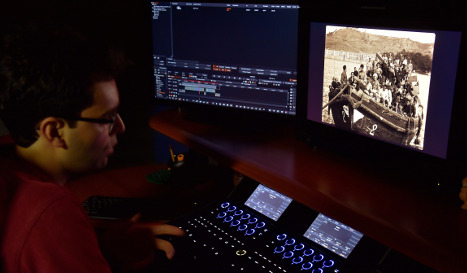 An employee of film restoration laboratory Cineteca di Bologna, works on the restoration of a film about the Armenian genocide. Photo: Vincenzo Pinto/AFP

A significant historical source that was discovered completely by chance, buried away and forgotten in the US Library of Congress, the silent film dates from 1923 and includes images of children packed onto boats in Turkey and lines of refugees trudging along roads.

The film is being shown as part of a selection intended to honour Armenian cinema a century after the beginning of the slaughter of Armenians at the hands of Ottoman Turkish forces.

Also on show during the festival are “Namus” (Honour), a 1925 work by Hamo Beknazarian that is considered the first Armenian film, “Sayat Nova” (The Color of Pomegranates) a 1969 film by Sergei Paradjanov and “Naapet”, Henrik Malyan's 1980 film about a genocide survivor.

Other rare documentary images include a five-minute film shot by the French army of Armenian refugees in camps at Port Said in Egypt.

But the jewel in the festival's crown is the four minutes of “Armenia, Cradle of Humanity” shot in Turkey soon after the end of the killing – a time thought previously to have only been recorded in still images such as those of German photographer Armin Wegner.

Mariann Lewinsky, one of the festival's curators, came upon the film by “a miracle” as she clicked through the internet data base of the International Federation of Film Archives (Fiaf).

Who shot the film and how it got to the Oregon Historical Society before being deposited in the Congress library is a mystery, says the Swiss researcher as she runs the recently-restored reel.

“I sent a little email to my colleagues in the library and they told me, 'Yes we have something, but we don't know what.'

“I insisted a bit and asked if I could come and see the condition of the film.”

Normally such a demand would take a bit of time to get a response but Lewinsky was quickly sent some photos and a telephone contact number. “The images were extraordinary, boats full of children, trains.”

Having obtained the reel, she quickly dated it to 1923, but her first thought was the people shown could be displaced Greeks – a theory that was dropped when she recognised a well-known Istanbul palace in the background of one shot.

Colleagues confirmed that, after the end of World War One, British forces assembled Armenian orphans in the building for evacuation.

“It is a miracle,” Lewinsky said.

An estimated 1.5 million Armenians were killed as the Ottoman empire disintegrated during World War One, according to a version of events now accepted by much of the world but disputed by Turkey.

Authorities there say only 300,000 to 500,000 Armenians died, and that the term “genocide” is inaccurate and offensive for what they depict as civil strife provoked by the Armenians siding with invading Russian troops. An equal number of Turks died in the fighting, Ankara maintains.

A century on, Lewinsky believes a new Turkey is emerging in which Kurds, Greeks, Armenians and ethnic Turks are moving towards “moments of reconciliation”.

Films like “Armenia, Cradle of Humanity” can only help this process, she says, invoking her hope that it could be shown at a small silent film festival in Istanbul in the near future.