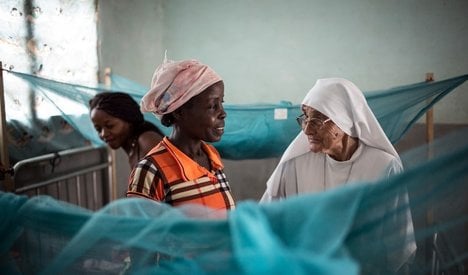 “The task of a midwife brings me great joy because God gives life but he doesn't give birth,” she told AFP at a maternity clinic in Zongo in the north of the Democratic Republic of Congo.

So when she met the pontiff, “I asked him to bless my hands because they touch all the children.” Small and bespectacled, the nun from Sardinia has spent more than a half-century in this country that spans the equator, watching as it won independence then dissolved into war. She's braved rampant looting and angry rebels — and was once spared from death because she “helps give birth”.

Watching her bustle about the clinic run by her order, the Daughters of Saint Joseph of Genoni, it's hard to believe she turns 81 on July 8. The facility's medical equipment, provided mostly with Italian funds, is more modern than maternity wards in several of the country's big city hospitals.About 40 babies are born in the Zongo clinic each month and several happy parents have named their newborns after Sister Maria.

Trained as a nurse in Italy then in tropical medicine in Belgium when it was still the colonial power in the Congo, the Catholic nun unpacked her bags in the northern province of Equateur in 1959 just a year before independence.

Fluent in Lingala, the most widely spoken local language, she cannot recall all major events but remembers the mid-1970s when the regime of dictator Mobutu Sese Seko (1965-1997) became overtly hostile to the Catholic church.

Mobutu campaigned for “authenticity” to rid the nation of colonial vestiges and to “Africanise” its institutions. The policy led to widespread sacking of church property, which was likened to undesirable imports from the West.

“They took away all the Christian statues in the mission” and forbade parents from giving their babies Christian names, Sister Maria said. Another strong memory was the arrival of rebels led by Laurent-Desire
Kabila, whose Rwandan-backed Alliance of Democratic Forces for Liberation brought Mobutu down at the end of the First Congo War (1996-1997).

“At our mission, they came in and stole everything. With two other sisters, I took sick people to the maternity clinic, believing that they would respect the place. But they destroyed everything and locked me in a room with a three-month-old orphan.”

One soldier saved her from another who wanted to kill her. “He said to him, 'You have to leave her. She is the one who helps our women give birth'.” After that incident, the nun crossed the Oubangui river to take refuge for a month in Bangui, the capital of the Central African Republic, on the opposite bank — but she eventually came back.

During the Second Congo War of 1998-2003, which drew in more than half a dozen foreign armies after Kabila fell out with Rwanda, the mission was left in peace by local rebel forces behind Jean-Pierre Bemba, who held sway in the territory.

Later named a vice-president, Bemba today is on trial at the International Criminal Court in The Hague for crimes his troops are accused of carrying out in CAR in 2002 after its then president Ange-Felix Patasse asked Bemba for help in putting down a rebellion.

'I shall give my bones'

During that violence, Sister Maria's mission became a haven of peace and assistance for many Central Africans who fled into DR Congo to escape the killing, raping and looting.

In March 2013, the former armed forces chief who topped Patasse a decade earlier, CAR president Francois Bozize, was himself ousted by mainly Muslim rebels of the Seleka alliance.

A flood of refugees again poured into northern DR Congo when atrocities by Seleka fighters provoked the emergence of largely Christian vigilante forces who exacted vengeance on civilians of the Muslim minority.

Again, the Daughters of Saint Joseph cared for wounded refugees, preaching brotherhood and refusing to give in to patients who did not want to share a room with someone of a different faith.

Tension remains high in the DR Congo amid suspicions that President Joseph Kabila, who took office in wartime in 2001, is manoeuvring to stay in power beyond his constitutional term, which ends in November 2016.

If there is fresh crisis, the elderly nun has no plans to flee. “I want to stay here. I don't want to be a deserter. I've given my whole life here and I shall also give my bones.”