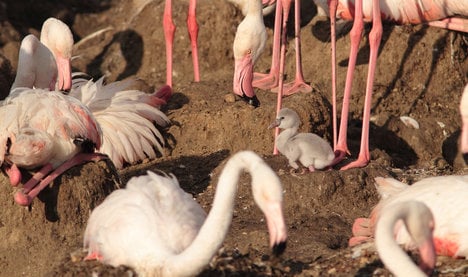 Greater flamingos, which are widespread across Africa, Southern Asia and Southern Europe, are the largest species flamingo and measure between 1.1 and 1.5 metres. However, until now all previous attempts at creating nesting sites for the pink birds in Sicily have failed.

This year's successful breeding represents a feather in the cap for the Italian ornithological association, Lipu. President of the organization, Fulvio Mamone Capria, expressed his delight at the good news, saying that the nesting was “an important recognition of the work Lipu and many volunteers have carried out to give new life to this area.”

The area was once home to coastal dunes that stretched for kilometres and was an area whose beauty inspired classical poets such as Ovid and Virgil. Unfortunately, the rise of a nearby industrial complex has done much to damage the area's beauty and biodiversity over the last 100 years.

Today, the Saline di Priolo reserve safeguards the final 40 hectare strip – one of the few sites in Italy that is suitable for the pink flamingo to use as a breeding ground.

The area is home to 216 different species of birds, which is around 40 percent of all of the observable species in Italy. Working in conjunction with Lipu, the reserve have made the nesting site accessible to the public from a safe distance.

Visitors can now watch the splendid birds wading in the coastal mud while trawling for food. They can watch the grey and downy chicks learn to fend for themselves and will be able to see them take flight at the end of the summer. At the end of the season the birds will move on to pastures new, perhaps never to return to Sicily.

The reserve is now planning a summer of events that it is hoped will bring people to see the birds and learn about Italy's wonderful, yet diminishing biodiversity. The first event? A Facebook competition to name the first flamingo born in Sicily.