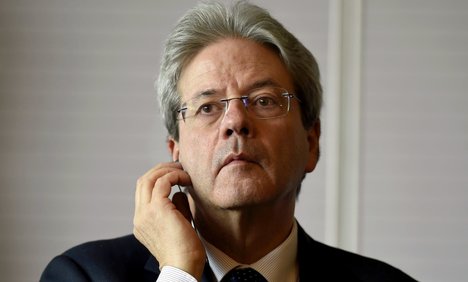 The current crisis “…is not the fault of mean Germans, but is the responsibility of the Greek governments which have followed one another these past 15-20 years,” he told the Italian daily Corriere della Sera.

Germany, the eurozone's de facto paymaster, has been the driving force behind requiring austerity policies to accompany bailout help for Greece.

German Chancellor Angela Merkel said Monday that conditions for a new Greek rescue package “have not yet been met.”

Greek voters resoundingly rejected in a Sunday referendum the offered bailout conditions, which required more tax hikes and benefit cuts, heightening the risk the country could be forced out of the eurozone.

“The situation was not resolved with the 'No' victory in the Greek referendum. The vote established that (Prime Minister Alexis) Tsipras has the support of the majority of the Greeks. But that is not a solution,” Gentiloni said.

Eurozone leaders were due to hold an emergency summit in Brussels later Tuesday, with Tsipras set to unveil new proposals for talks.

Gentiloni rejected “accounting” arguments for a Greek exit from the eurozone, a so-called Grexit, saying there are cultural, historic and strong geopolitical arguments to keep the country in the currency block.

“The fact that Greece remains an EU and Nato country can't be a secondary element in our analysis. And I say that without justifying the things done, or not done, by Athens these past months.

Italian Prime Minister Matteo Renzi said on Monday that the meetings of eurozone finance ministers and leaders on Tuesday should “indicate a definitive path to resolving” the crisis.