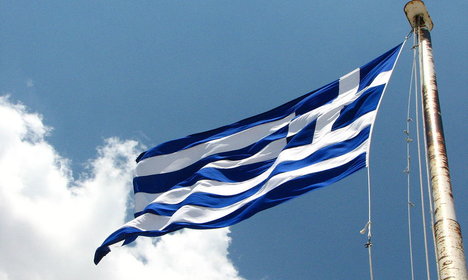 The gesture is down to the city's mayor, Filippo Nogarin, who belongs to the Beppe Grillo's Five Star Movement party, which has long called for Italy to exit the euro.

Nogarin told Ansa that the flag had been flying since before Greeks gave a resounding 'No' to bailout conditions proposed by international creditors in a referendum on Sunday, and that it was about showing Livorno's solidarity with Greek citizens amid their country's financial turmoil.

“We wanted to show the support we have for the men and women of this EU country that is going through a difficult moment,” Nogarin said.

“We want the EU to be an expression of the free circulation of goods, people and resources and not what it currently is: a strictly financial operation.”

Former comedian Grillo celebrated the outcome of the Greek vote, telling CNBC that the country will, sooner or later, have to “confront an exit from the euro” – and that Italy should follow suit.

Eurozone leaders were holdIing an emergency summit in Brussels on Tuesday.

Meanwhile, Italian Foreign Minister Paolo Gentiloni rejected “accounting” arguments for a Greek exit from the eurozone, a so-called Grexit, saying there are cultural, historic and strong geopolitical arguments to keep the country in the currency block.

“The fact that Greece remains an EU and Nato country can't be a secondary element in our analysis. And I say that without justifying the things done, or not done, by Athens these past months.”