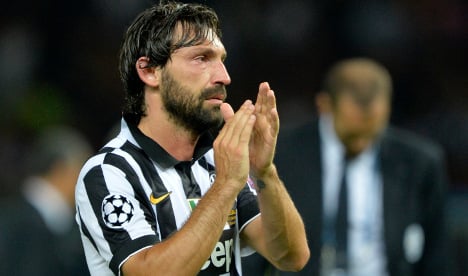 His last competitive game for the Old Lady was the 2015 Champions League final in Berlin's Olympiastadion, which they lost 3-1 to Barcelona.

Pirlo was on a contract at Juventus until June 2016 but the 2014/15 Italian double winners agreed for him to join New York a year early.

“Official, Pirlo will continue his career at New York City FC after four years in black and white,” the statement added.

“A huge thank you”, read a message on Pirlo's official Twitter account to his now former club.

“It was not easy to decide, but the time has come to start a new adventure, but I will never forget the relationship I have with these colours,” he assured.

With the pinnacle of his career coming in Germany in 2006 when Italy lifted the World Cup after a penalty-shootout victory over France, Pirlo also won two Serie A titles, two Champions Leagues and a Coppa Italia with AC Milan during a 10-year spell at the San Siro.

Based in the Bronx, New York City FC is regarded as the second club in the Big Apple after New York Red Bulls, the former club of the now-retired Thierry Henry.

Pirlo, who has signed an initial 18-month deal with an option for a further year, will play alongside former Chelsea great Frank Lampard and ex-Barcelona striker David Villa.

Meanwhile, Juventus have announced that coach Massimiliano Allegri has signed a one-year contract extension that will keep him at Juventus Stadium until June 2017.

Italy international midfielder Claudio Marchisio has also penned a new deal with the record 31-time national champions; Marchisio will remain with the Old Lady until the summer of 2020 after signing a four-year extension to his current deal, which was due to expire next year.

Marchisio's decision to stay will be a major boost for Juventus, with the futures of star midfielders Paul Pogba and Chile's Copa America winner Arturo Vidal in doubt due to interest from other top European clubs.

Striker Carlos Tevez has already left the club for a return to his native Argentina with Boca Juniors, with Atletico Madrid's Mario Mandzukic and Palermo's Argentine forward Paulo Dybala signed to replace him.