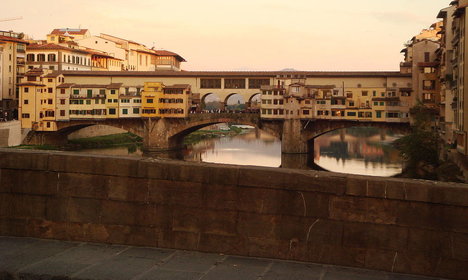 The overexcited pair were allegedly having sex on a bench in the city's Lungarno Torrigiani public gardens.

The gardens are a popular area of the city, near the famous Ponte Vecchio bridge, and the couple where in full view of the public.

But they were unfazed by the shocked reactions of passersby, who eventually called the police in an attempt to stop them.

Once on the scene, the police caught the young couple in the act.

The 23-year-old man and 20-year-old woman have been charged with committing an obscene act in a public place, Ansa reported.

This is not the first time tourists have been up to no good in Florence. Last September an American couple were caught having sex in central Via Fiorentina, in front of a Chanel boutique.

The citizens of Florence are so concerned about the behaviour of visitors to the city that they have set up a Facebook group known as “Firenze Degrado”, where members can share photos shaming people who get up to no good.