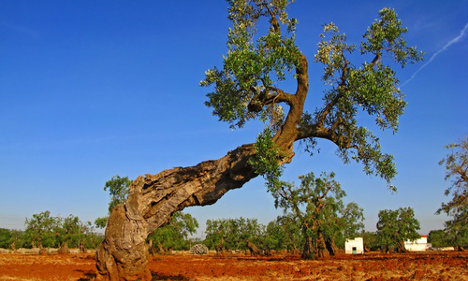 Forty-five olive tree were chopped down in Puglia. Photo: Shutterstock

The cull follows an EU request for Italy to get rid of trees infected by xylella fastidiosa, which emerged in 2013 and also threatens citrus fruit and vineyards.

France also declared an embargo on Puglia products at risk of infection from the bacteria, which causes the trees to wither away and for which there is so far no remedy.

The latest cull was carried out around Oria, in the Puglia region, in a bid to stop the epidemic spreading to the north, Ansa reported.

“We continue our efforts to protect the agricultural and olive assets in Puglia,” he said.

But some local farmers were angered by the decision, with one saying that “there have been no tests, this is not the way to stop contagion”.

And in a letter to EU Health Commissioner Vytenis Andriukaitis earlier this year, the Italian environmental association, Peacelink, pointed to scientific studies blaming a type of fungi rather than the xylella fastidiosa for blighting the olive trees.

“The European Commission risks condemning to death the whole Puglia ecosystem on the basis of results of tests that have not even ascertained the pathogenicity of xylella in those trees,” it warned.

Despite the protest, Italy marked off an emergency area of 241,000 hectares in Puglia that is affected by the disease. The cull got underway in April.