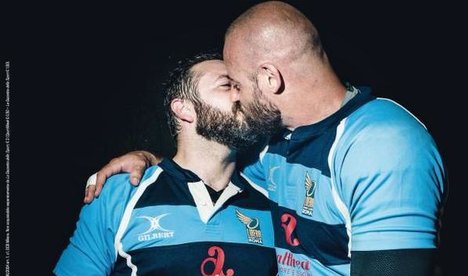 The  bold headline of the July 11th cover of Sportweek asks readers: “Who's afraid of a kiss?”

It would seem many readers are still afraid of a kiss, at least when it's between two members of the same sex.

The divisive cover has provoked outrage among some fans of the magazine, unhappy with the display of homosexuality on the cover of the popular weekly.

Many comments were far more unsavoury, such as one user's eloquent reaction, “F*** Off! What the f***?!”

But there were also plenty of supportive comments, with many people seeing it as a positive challenge to outdated attitudes towards homosexuality in Italian sport.

“I'm not afraid” said Twitter user La Volpe, “but many Italians are, and its fear and ignorance that create homophobia.”

From the controversy surrounding gay marriage to Venice's mayor banning homosexual books in schools, homophobia is a divisive issue in Italy and the cover arrives at a time when gay rights' movements are gathering speed in Italy.

However, news on Thursday that a 40 year-old man from Cerignola, in Calabria, took his life after receiving abuse from his family over his sexuality, highlights that there is still a long way to go to change attitudes.

With its cover, Sportweek is trying to challenge homophobia in sport, something the magazine refers to as “the last taboo”.

There have been many high-profile examples of gay sportspeople, such as tennis ace Martina Navrátilová and Welsh rugby star Gareth Thomas. In Italy, however, famous sportspeople would seem to be far more reticent in coming out.

Indeed, the first sports star to come out in Italy was Nicole Bonamino. Bonanimo is the goalkeeper for the national in-line hockey team and told the press she was a lesbian in 2012.