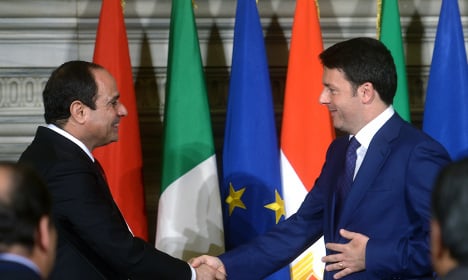 He also vowed that Italy would not be “intimidated” after Saturday's attack claimed by the Islamic State group that killed one civilian and injured nine more people.

“I think al-Sisi is a great leader,” Renzi said in an interview with Al-Jazeera television broadcast Sunday.

“Let me be very frank. In this moment Egypt will be saved only with the leadership of al-Sisi,” Renzi said in English.

“This is my personal position and I am proud of my friendship with him and I will support him in the direction of peace because the Mediterranean without Egypt will be absolutely a place without peace.”

Speaking to Sisi on Saturday after the consulate bombing, Renzi said the two countries will stand together “in the fight against terrorism and fanaticism”.

The attack was the first on a foreign mission in Egypt since jihadists
began a campaign against the country's security forces two years ago following a crackdown on Islamists.

Asked by La Repubblica newspaper about possible reasons Italy was targeted, Renzi said he would not play a “guessing game”.

“Attacks like this can have random aspects, to show the logistical ability to hit a Western nation,” he told the paper.

“One thing is for sure, Italy must react with quiet steadfastness. We will not allow ourselves to be intimidated.”

Sisi, the former army chief who ousted Islamist president Mohamed Morsi in July 2013, has come under fire from rights groups over the deadly Islamist crackdown as well as increasing restrictions on media freedom.

Renzi also told Al-Jazeera it was “absolutely important” for Egypt to ensure a free media and to enable journalists to work in safety.