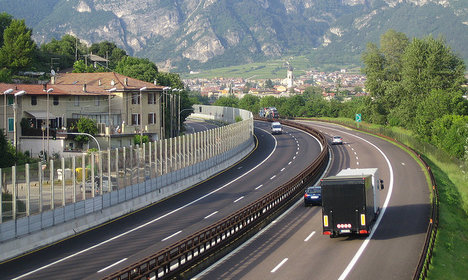 The A22 in northern Italy. Photo: Portobenseno

The incident happened at around 6.30am on Sunday morning, as their coach was travelling along the A22 in Trentino, back towards the German city of Bremerhaven, si24.it reported.

The bus was carrying 43 people, including 35 schoolchildren between the ages of 17 and 19.

Following the incident, the emergency services were called and the fire service had to intervene to remove passengers from the overturned coach.

Eight ambulances took the injured teenagers to hospitals in Trento, Roveto and Cles in the Trentino-Alto Adige/Südtirol region of northern Italy.

None of the teenagers are thought to have life-threatening injuries. The cause of the accident is not currently known.