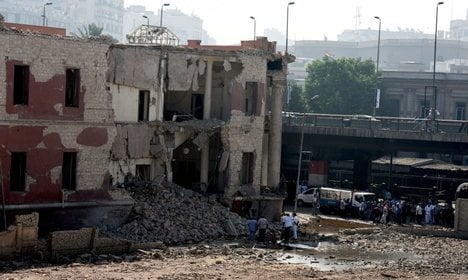 A car bomb struck the consulate on Saturday, killing a civilian and wounding nine people in the first attack on a foreign mission in Egypt since jihadists launched an insurgency against the country's security forces two years ago following a crackdown on Islamists.

The bombing was a clear warning to Cairo, he said. “This way terrorists get to say they are able to get the government in the centre of Cairo, close to a metro station, underneath a major highway bridge,
at a foreign institution, but at the same time, without inflicting (huge) casualties – this time.”

The consulate's location in downtown Cairo made it a target, said a Western diplomat on condition of anonymity.

The mission is housed in an historic building between Ramses train station and Tahrir Square, amid a maze of streets filled with people, vehicles and vendors.

“Security there around is kind of difficult to keep if you compare it to security measures at the UK or the American embassy,” situated in Cairo's upscale Garden City suburb, the diplomat said. “So it was an easy target in a way.”

Italian Prime Minister Matteo Renzi told La Repubblica newspaper that the attack “can have random aspects, to show the logistical ability to hit a Western nation”.

He said Egyptian President Abdel Fattah al-Sisi was the only one who can “save” Egypt.

“This is my personal position and I am proud of my friendship with him and I will support him in the direction of peace because the Mediterranean without Egypt will be absolutely a place without peace,” Renzi told Al-Jazeera television.

Egypt has been rocked by violence since then army chief Sisi overthrew Islamist president Mohamed Morsi in July 2013.

In an ensuing government crackdown, hundreds have been killed and thousands imprisoned, mostly supporters of Morsi.

Jihadists say their attacks are in retaliation for the crackdown. Saturday's bombing shows the growing reach of IS jihadists in staging attacks in mainland Egypt and not just in North Sinai where militants have killed scores of policemen and troops.

Attacks in Sinai are claimed by Isis's Egyptian affiliate “Sinai Province,” but Saturday's attack was claimed by a group calling itself “IS in Egypt”.

“This is the first attempt to establish a new Isis affiliate in mainland Egypt,” said Michael Wahid Hanna, an Egypt expert with the New York-based Century Foundation think-tank.

“This attack indicates the ambition and reach of Isis. It's a significant development… We can't assume how sustainable the expansion is, but it's an attempt to expand.”

Police officials have previously said that jihadists have struggled to establish a firm foothold in Cairo or in the Nile Delta, with local residents often tipping off security forces.

In May, six alleged members of Isis who were convicted of killing soldiers were executed, including some who had been arrested in a raid north of Cairo last year.

“Every day we are dismantling terrorist cells, preventing attacks, and security forces are being deployed to protect installations,” said a top police officer at the interior ministry.

“Perhaps the Italian consulate was attacked because of Italy's support to Egypt.”

Jihadists are giving a clear message that “Egypt is unstable”, said Mohamed al-Zayat of the Cairo-based Regional Centre for Strategic Research.

“And if you strike a foreign installation, it will echo abroad in a much bigger way than if you hit an Egyptian installation.”