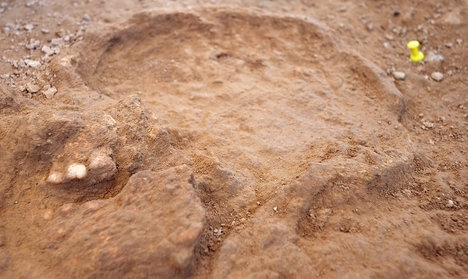 A Paleolithic skull, similar to that found in Villabruna. Photo: Boris Horvat / AFP

The study was carried out by scientists from the Italian universities of Bologna and Ferrara, who analyzed a dental cavity found on a 14,000-year-old skeleton at Riparo Villabruna, in the Venetian Dolomites, in 1988.

Up until now, the oldest existing evidence of paleodentistry dated such operations between nine and seven thousand years ago. Paleodentistry concerns the low-tech interventions that our ancestors performed on themselves thousands of years ago to maintain dental hygiene.

Marco Peresani, from the University of Ferrara, told Il Resto del Carlino that the discovery showed the “creative and technological ability that was present before the Neolithic”.

But how was this early dental operation performed? The hole on the Villabruna man's third inferior molar revealed that the tooth was cleaned out using a flint microlith - a small, sharp stone tool.

The microlith was used to pick away infected tissue from inside the tooth, which is an exciting discovery, according to the co-ordinator of the research, Stefano Benazzi, from the Univerity of Bologna.

”The discovery shows that the man from the end of the Palaeolithic [denoting the early phase of the Stone Age] period was aware of the damaging nature of an infected cavity and of the need to intervene with microlithic tools to remove the infection,” he told the newspaper.

Albeit a rudimentary method, it is the earliest known example of dentistry and suggests that dentistry evolved from the much older and more widespread practice of toothpicking, in which a twig or bone was used to remove food matter from between the teeth to maintain oral hygiene.