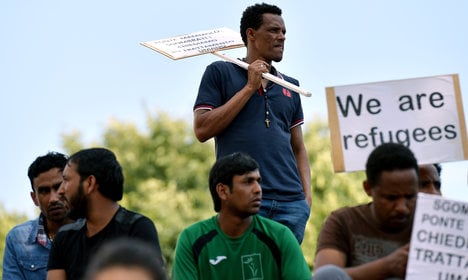 The incident happened on Tuesday afternoon at the state-run Sprar (System for the Protection of Asylum Seekers and Refugees) centre in Vittoria, near Ragusa, Sicily.

The motive? The migrants had not received their weekly €17.50 allowance for Saturday July 11th.

But it's claimed that this wasn't down to neglect. They hadn't been paid because they had refused to be transferred to another Sprar centre in Agrigento, in south-west Sicily, Ragusa24.it reported.

At the beginning of July, some 34 of the centre's 45 inhabitants emphatically refused to move to Agrigento, and rebelled so much that police had to be called in to restore order at the centre.

Finally, some agreed to leave but others remained, making use of services and resources to which they no longer technically had the right.

The money of those who refused to be transferred was not paid because officially at least, they had been transferred to the Agrigento centre and were no longer at the Vittoria one.

Furious at not being paid, the twelve angry migrants burst into the centre director's office to demand their pocket money – a request which was refused.

Led by a 24-year-old from Guinea Bassau, they then reportedly decided to take their money by force, locking the 46-year-old centre director and his 35-year-old colleague in an office, before pinching the keys to his scooter.

They also tried to take the bunch of keys that contained the one for the centre's safe, where the money used to cover its day-to-day costs is kept. During the attempted robbery, they also took control of the centre's phone, to make sure nobody called the police.

In spite of everything, the director managed to call the police from another phone in the office where he was trapped.

The migrants were taken to the police station, formally identified and placed under house arrest, accused of kidnapping and attempted robbery.