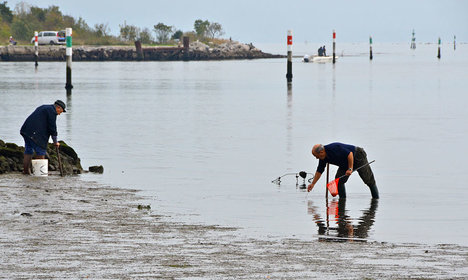 Clam fishing along the Adriatic coast is a centuries-old practice, but is at risk of disappearing completely due to draconian EU legislation.

Currently, EU law prohibits clams under 25mm in diameter being removed from the sea.

“You can't find a 25mm clam here” Stefano Cecchini, director of the fishermen co-opertive, Casa del Pescatore, told La Repubblica. “They grow to 22mm and then they stop growing and often die.”

The problem seems to be an excess of fresh water from the River Po. Historically, the Po's average discharge has been around 1500 cubic meters per second, but in recent years this has been much higher.

Discharge peaked at 7000 m3/s in the spring of 2013 and last year averaged 2378 m3/s. The excess water has reduced levels of salinity around the tidal mudflats of the Adriatic and eroded sandbanks, stunting the clam's growth.

Worried fishermen are protesting against the regulation, which means they can incur fines of €4,000 if they fish just one clam below the size stipulated by the EU. Restaurants also face the same fine if they are caught serving non-regulation clams.

“With this regulation they are destroying the entire industry,” Cecchini added. “Two thirds of the Adriatic dredgers have stopped work.”

Worried fishermen like Cecchini argue that the current legislation on sustainable fishing doesn't take into account how the local climates are changing.

“If the law doesn't change, our Adriatic clam, the Chamelea Gallina, the most tender and delicious there is, will just be a memory.”