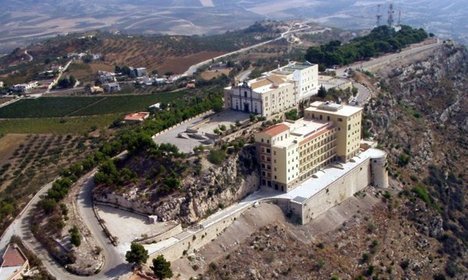 The ill-fated hotel is much loved by local pigeons. Photo: agrigentonotizie.it

The project was developed by the region of Sicily to promote the beauty of the area around Sciacca, southern Sicily, in particular the nearby thermal baths which have been well-known since antiquity.

The site for the hotel was perfect. Located on top of a rocky outcrop on Monte Kronio, and within walking distance of the thermal springs and the Basilica of San Calogero, the hotel was supposed to be able to offer guests the chance to experience the best of Sicily.

READ ALSO: How Italy is bringing its ghost towns back to life Construction of the 300-bed, five-story hotel began in 1954 and took nearly 30 years. By the beginning of the 1980s, the hotel was finally nearing completion, but there was a hitch.

No agreement had been reached over which company would manage the hotel for the coming ten years. During that time, the hotel began to fall into ruin and so Sicily's regional authorities decided to revamp it.

By 1993, the hotel was once again ready to be opened: it was even inaugurated. Finally visitors from far and wide would be able to come and admire the wonderful views from the hotel's balcony. But there was a minor hiccup.

It emerged that a grave oversight had been made during the hotel's construction: after 40 years of building work, the hotel was still without a properly connected drainage system.

The incredible oversight cost the region dearly. In 2010 it paid €800,000 in compensation to the co-operative that had won the right to manage the hotel in 1993, La Repubblica reported.

The problems of 1993 set plans back a few more years. It was finally inaugurated — again — in 1998, but closed immediately.

READ ALSO: An Italian hotel has been named the best in the world for families

In 2000, another company was found to manage the Grande Hotel San Calogero, and plans were drawn up to finally connect the hotel's drainage system to the town.

But the work was never started. La Repubblica reports that Sciacca council had “forgotten” to ask for the funds needed to redevelop the hotel's drains and plans were shelved once again.

After 60 years of work and billions of Lira invested, the true cost of the project in today's money is difficult to quantify. Suffice to say that the hotel's only guests are pigeons.

Perhaps, one day it will open. Until then, the Grande Hotel San Calogero can lay claim to being one of Italy's biggest white elephants and a fine example of how not to build a hotel.