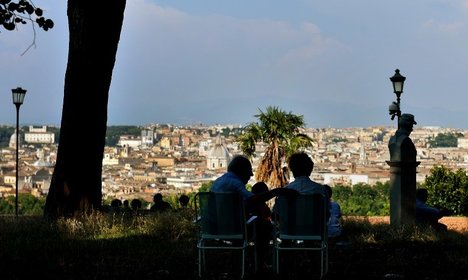 The shocking number of deaths, due to a series of heatwaves since the beginning of the month, led to a 29 percent spike in the average mortality rate among the over 75s in Piedmont for this time of year, Arpa Piedmont said.

“Recently the mortality rates are much higher than you would expect. We will only have a net figure at the end of the summer,” Renata Pelosini, from Arpa, told La Repubblica.

Pelosini was pessimistic about the possibility of respite from the searing heat, adding that “it's possible that temperatures will continue to rise.”

With the hot temperatures brought by current heatwave 'Caronte' set to keep temperatures in the high thirties until next Thursday, people are wondering how deadly this year's heatwave will be for Italy.

Current hot temperatures are reminiscent of the summer of 2003, when the whole of Europe was gripped by a heatwave that killed 18,000 people in Italy alone.

The current heatwave has caused the number of calls to the emergency services in Italy to spike by around 10 percent.

Most at risk are the elderly, for physical reasons. However, there is also an important social factor: pensioners living alone often don't know who to call when they start to feel ill.

As a result, the region of Piedmont has established a voluntary task force that will offer domestic assistance to the elderly during the heatwave, in an attempt to quell the number of deaths.