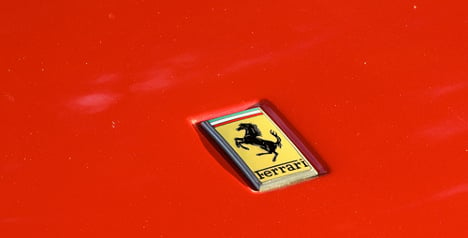 Ferrari has filed to list its shares on the New York Stock Exchange. Photo: NaotakeMurayama

FCA announced in October that it would spin off its famed sports cars and seek an IPO. Now Ferrari intends “to be listed on the New York Stock Exchange,” FCA said in a statement.

Its filing with the US Securities and Exchange Commission (SEC) did not specify the share price range nor the number of shares to be offered, but FCA said it was “not expected to exceed 10 percent of all ordinary shares.”

FCA chief executive Sergio Marchionne recently estimated the total value of Ferrari at €10 billion euros ($11 billion), according to Italy's La Stampa newspaper, which is part of the FCA group.

With the spin-off of Ferrari, the auto group expects to finance in part its ambitious €48 billion development plan over five years, which it has announced in 2014, with the goal of selling seven million cars annually.

The merged Fiat Chrysler, which itself entered the stock market in October 2014, had previously said that it wanted to list Ferrari both on the US stock market and an unspecified European market.

FCA currently holds more than 90 percent of Ferrari's capital with Piero Ferrari at around 10 percent. He is the son of founder Enzo Ferrari who founded the company in 1947 at Maranello, near Bologna in central northern Italy.

Ferrari plans to remain in italy and is working to prevent any transfer or cut back of its activities in the country, FCA said.

Ferrari, which produces around 7,000 vehicles a year, recently had to recall 2,600 cars worldwide due to faulty airbags.

Since the decision to spin off from FCA, Ferrari has been transformed into a new company, New Business Netherlands NV, which will ultimately be renamed as Ferrari NV, the group said.