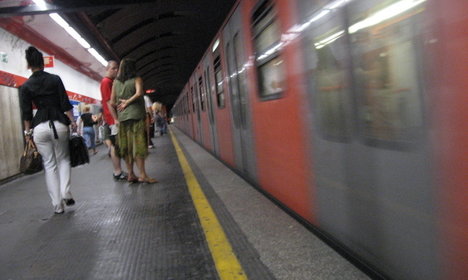 The underground in Rome. Photo: Hareschase

The journey between Termini on Line B and subsequent Castro Pretorio was filmed by a passenger on their mobile phone and immediately published on social media, where angry citizens expressed their frustration at Rome's ongoing transport problems.

The video, uploaded to youreporter.it, shows the horrified passengers react in disbelief as the doors of the carriage fail to close. “As you can see,” says the man filming, “the packed train is calmly travelling along with the doors open.”

Meanwhile, a video taken by a commuter in another carriage shows a passenger pulling the emergency brake – but the train doesn't come to a stop.

“Not only do we have delays, strikes and tropical temperatures inside the carriages,” Rienzi told La Repubblica, “now we're travelling with the doors open too.”

If the cause is down to human error then the perpetrator could face a jail sentence of up to five years.

On Thursday afternoon Line B ground to a halt between 7pm and 9pm, further invoking the ire of Rome's long-suffering commuters.