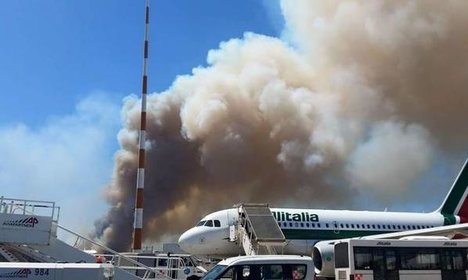 The large cloud of smoke which stopped flights at Fiumicino. Photo: Karl Stagno-Navarra

Italian airline giant Alitalia said flights had resumed after firefighters gained control of the blaze and was “fully operational again”.

Clouds of grey smoke blown by strong winds had briefly grounded all flights at the capital city's biggest airport, which was forced to close in May after a blaze devastated part of a terminal and had yet to fully reopen.

Teams of firefighters raced to tackle the fire in a pine grove in Focene, next to the airport, which appeared to have been started on purpose and had spread to engulf several vehicles in a nearby carpark.

“The situation is very serious, the blaze is about one kilometre (about half a mile) wide,” said Fiumicino mayor Esterino Montino.

“The fire seems to have started in two or three different places. It's difficult to intervene because the wind is blowing towards the pine grove,” he said, as two fire-fighting planes and two fire-fighting helicopters helped battle the blaze.

The airport is still struggling to recover from a nighttime blaze triggered by an electrical fault in a bar which sparked scenes of total chaos earlier this year with thousands of people hit by flight cancellations and airport staff forced to wear protective masks.

Alitalia said on Wednesday that the cost of damages from the May 7th fire have reached €80 million ($88 million), but the figure could still rise.

The airline's CEO Silvano Cassano said in a statement that it had been an “extremely difficult period” and warned the company could be “forced to shift its growth elsewhere”.

The fire was also bad news for the capital's mayor Ignazio Marino, who has been battling accusations that the eternal city has descended into grimy and dishevelled chaos, where the transport sector in particular has failed pitifully in the searing summer heat.

The embattled mayor was confronted with revelations at the end of last year of a mafia network operating out of Rome's city hall, pocketing millions of euros from a string of lucrative contracts thanks to corrupt contacts on the inside.

Marino promised on Tuesday that the heavily-indebted city would be cleaned up in time for a Jubilee year which kicks off in December, appointing a new transport councillor and assuring sceptics that Fiumicino airport was finally back on track.

It was not clear whether Wednesday's fire was started by enemies of Marino, who investigators say refused to play ball with the criminal gang operating in city hall under the command of a notorious one-eyed mobster.