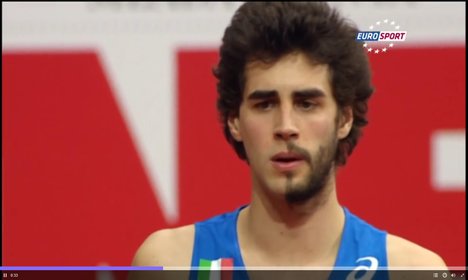 The unconventional look has captured the attention of world's media. It has been called “utterly lunatic” by The Times, “maverick” by The Daily Mail and “half amazing” by men's fashion magazine, Esquire.

Of course, Tamberi is not the first Italian to pioneer a silly look – many other of his compatriots, past and present, have risked damaging Italy's good name in the word of fashion thanks to some questionable choices.

A few of them are below, but will start with the now-famous half-beard. But will it catch on? Photo: Screengrab/YouTube

The latest dodgy fashion trend to come out of Italy. Tamberi first sported the look at the World Championships Athletics in March. Even though it probably makes the athlete aerodynamically unbalanced, the 22-year-old Tamberi insists the half-beard brings him luck.

On Saturday, Tamberi broke the Italian high jump record, so there might just be something in it. Perhaps the bizarre look will catch on among hipsters soon…

Any of Mario Balotelli's outrageous haircuts Tamberi Isn't the only Italian sportsman who enjoys turning heads with a radical style. He may not have tried out the half-beard yet, but Mario Balotelli has sported a number hairstyles that leave a lot to be desired.

This thin, bleach blonde mohawk is just one of the many questionable hairstyles he's gone with recently. Unlike Tamberini, Balotelli can't argue that the crazy hairstyles bring him luck. The forward managed just one goal in sixteen starts for Liverpool last year. It's not just eccentric celebrities trying to start dodgy trends either. Luxury Italian fashion house Moschino thought it would be cool to design a range of products based on the famous golden arches of the American fast food giant, McDonald's.

In 2014, the Italian label produced a whole range of expensive products, from bags and dresses to iPhone covers. A quilted purse featuring the golden 'M' was priced at an eye-watering €1,000.

Cost and garish colors aside, it's unclear why anybody would want to walk around in a dress that looks like a fast food wrapper. Then there's the fact that you appear to be nothing more than a walking billboard for the company…

Needless to say, the range came with a side order of controversy, with many people accusing the brand of glorifying the fast food company and its logo. No tweezers! Emperor Augusts, a monobrow fan. Photo: Till nierman

But dodgy trends from Italy are by no means a modern phenomenon – the not-so-plucky Romans loved a good monobrow.

Emperor Augustus was well renowned for his, but the style was, in fact, more popular among Roman women, who let their eyebrows grow together. Big and bushy was beautiful in ancient Rome – plucking wasn't introduced until the first century AD.

Fair-skinned Roman women would even use cosmetic powders made from soot to make the eyebrows heavier and help them achieve the desired monobrow look. The chopine was a hideous women's platform shoe popular during Renaissance Venice. In spite of being rather ugly, its popularity lasted throughout the 15th, 16th and 17th centuries.

But the chopine isn't just ugly, it's uncomfortable too. Scholars have written that women who who wore them (often as high as 30 centimeters) had to constantly be accompanied by maids due to their tottering and unstable gait.

In spite of all this, the chopine caught on in Spain in the 15th century and was so popular that much of the nation's cork supply was diverted to the manufacture of this woefully impractical women's shoe. The Balbo beard is named after Italo Balbo, a fascist flying ace and lover of dodgy facial hair. He pioneered the look in the 1920s and 1930s when he was the leader of the not-so-fashionable fascist blackshirts.

The Balbo beard is a strange concoction, involving three parts: a moustache, a soul patch on the lower lip and a goatee on the chin.

Although not the most popular choice, it is still sported by some men today, notably Robert Downey Junior, who has been rocking the Balbo for years.