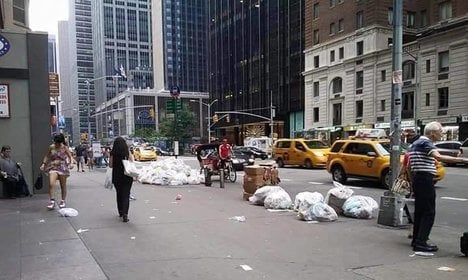 Rome has become a popular topic for sniping international journalists over the past week, with high-profile articles about the city's supposed “degradation”  appearing in both The New York Times and the French national daily, Le Monde.

The negative publicity has cranked up the pressure on Rome's under-fire Mayor Ignazio Marino – but some Facebook users have leapt to his defence, by sharing photos that show similar levels of degradation in New York.

The photos were shared by users on the Facebook page “Io sto col Sindaco Marino” (I am with Mayor Marino), in an attempt to defend the city and its beleaguered leader from the wave of bad press.

Facebook user Marco Comandini posted a photo showing a camp of tents for homeless people set up at a station in New York. “We're hardly worse than any other city,” wrote the irate user.

Comandini stated that photos circulating in the press were “a dirty trick that damages the city's image and affects tourism.”

Another user, Anna Rosaria Erriquez, wrote that speaking badly about Rome was “just a way for the French and Americans to feel superior.”

Giorgio, who grew up in the Italian capital but has spent some time in New York, told The Local earlier this week that “New York's rubbish problem is much worse than Rome's – it's everywhere.”

Indeed, pictures uploaded by users show piles of rubbish lining the streets of New York and outside the plush Hilton Hotel on Sixth Street.

But whether such attempts to protect Rome's reputation can be fruitful remains to be seen – the page “Io sto col Sindaco Marino” currently has just 5,712 fans on Facebook, compared to 89,924 fans for the page “Roma fa schifo” (Rome is disgusting), where much of the furore against the Italian capital began.