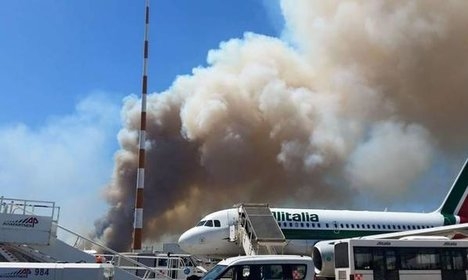 The fire broke out in a pine grove near Rome's Fiumicino airport. Photo: Photo: Karl Stagno-Navarra

The airport was forced to suspend all flights for around two hours on Wednesday after a fire broke out in a nearby pine grove, spreading dense smoke across the runway.

Italian airline Alitalia said the airport was “fully operational again” after firefighters gained control of the blaze following the afternoon shutdown, but many take-offs suffered delays into the night.

Several flights were delayed for more than four hours, a French tourist named Lise told AFP as she waited for her flight to Paris, which was delayed by over two hours.

Clouds of grey smoke blown by strong winds had briefly grounded all flights at the capital city's biggest airport, which was forced to close in May after a blaze devastated part of a terminal and had yet to fully reopen.

Teams of firefighters raced to tackle the fire in a pine grove in Focene, next to the airport, which spread to engulf several vehicles in a nearby carpark.

The airport is still struggling to recover from a nighttime blaze triggered by an electrical fault in a bar which sparked scenes of total chaos in May, with thousands of people hit by flight cancellations and airport staff forced to wear protective masks.