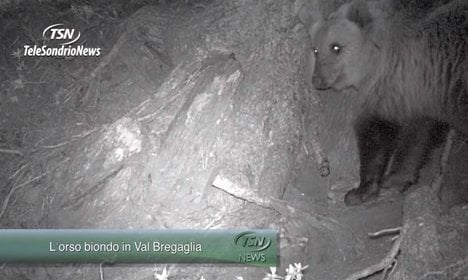 The 'blond' bear was caught on camera by a farmer in Lombardy. Photo: Screengrab/YouTube.

The creature was filmed in Val Bregaglia, Lombardy, by a goat farmer who set up a camera to watch his flock.

And it is only the second bear sighting in the area for the last 20 years.

The video below, which was filmed at night, shows the medium-sized bear rummaging around for food.

The clip was immediately handed over to the authorities.

Experts in the local police force told laprovinciadisondrio.it that the bear had an “anomalous blond colour” and described the creature as “good-natured”, noting that no attacks on livestock had been reported.

But this is not the first time the creature has been caught on camera. The same 'blond' bear captured hearts in Italy last year after being filmed scratching itself against a tree.

However, since its debut appearance the bear has been elusive.

Now, thanks to its latest star turn, many fear that the bear might be about to experience the downside of its new-found fame, as locals and holidaymakers flock to see the strangely coloured beast.

Luca Della Bitta, the mayor of the local province, Sondrio, warned curious residents and tourists not to venture into the forest in search of the bear.

“If anyone captures a glimpse of the bear, or its tracks, they should leave the area straight away and report what they have seen to the authorities,” he said.

The bear's second hit video comes at a time when bears are invoking the ire of residents in the neighbouring province of Trentino, with calls being issued for a cull.