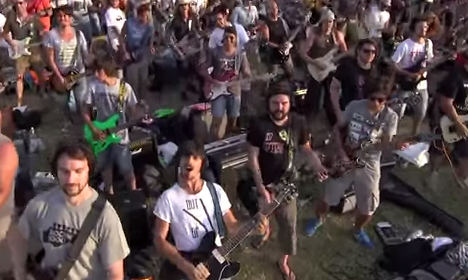 The video below clocked up over five million views in just 48 hours when it was posted on YouTube late last week.

The project kicked off in spring 2014, when Fabio Zaffagnini and several friends were looking for “a mad idea” to convince the rock band to come to Cesena, in the Emilia-Romagna region, to play for them.

After a year's planning, 1,000 fans met up in a park in the city on July 26th to thrash out the song on drums, guitars and microphones, belting out the hit tune together as the sun set.

“One thousand people, one thousand rockers, come at their own cost from all over the country, for a single song, your song,” Zafagnini says at the end of the video.

“So we ask you, the Foo Fighters, to come and play for us here in Cesena,” he said.

Posted on Thursday on YouTube, the video had over been viewed over five million times by late Friday and over 16 million by Monday morning.