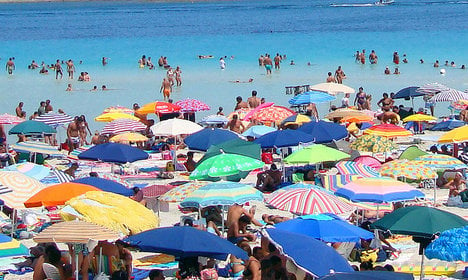 Italians have been flocking to Italy's beaches, especially in Sardinia. Photo: Tofom/Flickr

After a rainy 2014, Italians are flocking to the country's beaches, while there has also been an increase in the number of visitors from abroad, according to figures from Federalberghi, the hotel association.

Estimates suggest that the turnover from summer tourism in Italy will increase 7.7 percent on last year to €18.3 billion.

No doubt this will be seen as another positive sign for the country's economy as it tentatively emerges from a triple-dip recession.

The number of holiday-making Italians is set to increase by 8.6 percent on last summer, with the majority heading to the south.

The favoured destinations are the islands of Sicily and Sardinia, followed by the regions of Puglia and Calabria.

According to the data, the majority of Italians prefer a staycation and just 19 percent of all holidaymakers will opt to go abroad.

Bernabò Bocca, the president of Federalberghi, said the figures showed that tourism “could be a point of departure for the recovery of the entire region.”

Figures also anticipated a rise in the number of foreigners visiting Italy, which is set to grow by 2.5 percent this year.

But Bocca warned that there was still much that could be done to improve tourism across Italy.

“We can't rest on our laurels. Italy needs considerable investment and a strong plan for redevelopment and promotion,” he said.

Nonetheless, the data was welcomed by the Italian premier Matteo Renzi, who tweeted that the figures were “very good…especially for the south.”