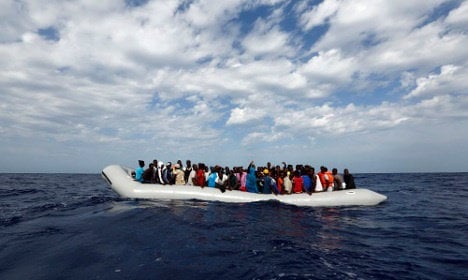 “These are people who are very agitated, very afraid, and panic can lead to disasters,” Flavio Di Giacomo, a spokesman for the International Organization for Migration (IOM) in Italy, told AFP a day after a packed fishing boat overturned off Libya, leaving more than 200 feared drowned.

Juan Matias, a project coordinator for Doctors Without Borders (MSF) who was at the scene, described “a horrific sight, people desperately clinging to lifebelts, boats and anything they could, fighting for their lives, amidst people drowning, and those who had already died”.

The boat had sent out a distress call but as Irish patrol vessel Niamh arrived to help them, anchoring about a nautical mile away in preparation to launch rescue boats, it flipped over as those aboard rushed to one side.

It is the third such disaster this year: in April, 400 people died when their boat overturned as they hailed rescuers and less than a week later another 800 migrants were feared drowned after the migrants shifted off-balance when they reached the cargo ship coming to their aid.

The rescue effort in this case was massive, with seven ships helping pull men, women and children from the sea and searching for survivors. Of more than 600 people onboard, over 350 were pulled to safety. Others are feared to have gone down with the boat.

The relentless wave of departures from north Africa means often rescuers have to deal with several disasters at once, and the nearest vessel is forced to do its best at saving all those in difficulty – sometimes at night – whether or not it is equipped to deal with shipwrecks.

“The boats are overcrowded and unstable by definition. It's the same with the dinghies… which have been roughly assembled and can easily be punctured,” Italian coast guard spokesman Filippo Marini told AFP.

“If the movements on board are not controlled, they are easily overturned. Often there's a rush to get to the rescue ships, to be the first to be saved,” he said.

Paula Farias, an MSF project coordinator based in Greece, which has also had to deal with thousands of boat arrivals, said “the beginning is the most critical moment of the rescue, and we have developed specific procedures”.

“We leave the big boat far from the boat in distress and send little inflatable boats to carry out the rescue,” she said.

“Translators in Arabic, English and French tell them that they should not move, and that no one will be transferred to the big boat before everyone has their life-jacket on. The key is to take your time, to be calm and not rush,” she added.

Di Giacomo said deadly accidents were less likely to occur if those racing to rescue migrants were part of Triton, the European Borders Agency Frontex's patrol and rescue mission in the Mediterranean, because they are trained in dealing with such situations.

“They tell the migrants to calm down, throwing life jackets and life rafts if needed, and can easily transfer people to safety,” he said.

“It's much more difficult if it's a merchant vessel which is carrying out the rescue. They do not have the right equipment, they also have very high sides and the migrants have to climb up ropes to get on board,” he added.

“It's no easy task, especially if the rescue happens at night.”

In the biggest tragedy so far this year, it was a Portuguese-flagged merchant ship which came to the rescue of an overcrowded boat at night, but a combination of poor driving by the migrant captain and panicking people moving on board caused it to capsize in the dark.

The number of deaths at sea has dropped dramatically since Triton began patrolling nearer the Libyan coast in June, the IOM said.

While 1,800 migrants died during the crossing in the first four months of the year, 200 died between May and July, with causes of death more likely to be suffocating in the hull or being overcome by dehydration than drowning.

But Frontex warned on Thursday that they were not being given the necessary resources by members states to tackle the situation, with further tragedies possible as those fleeing war and persecution continue to risk their lives in the Mediterranean.