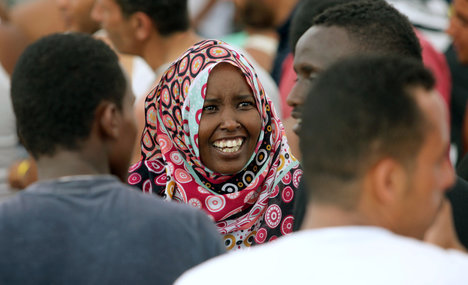 A woman smiles after disembarking from the Irish rescue vessel. Photo: Marcelo Paternostro/AFP

Families and hundreds of young men follow, barefoot, blinking at the sight of the crowd waiting to help those plucked to safety after their overcrowded boat sank off Libya, taking more than 200 people with it.

The last to disembark on Thursday were the families of 25 people whose bodies had been recovered from the water.

Flowers offered by the city of Palermo were placed on the light-coloured wooden coffins as they were carried off and into waiting black funeral vans.

Three “very young” children were among the dead, a Save the Children representative told AFP.

Adolescents, many believed to be from sub-Saharan Africa, Syria and the Indian subcontinent, shook hands with the crew of the Irish patrol vessel Niamh, which was first at the scene of the disaster and brought 367 survivors, including 13 children, to Sicily.

Commander Ken Minihane said his crew had done everything to try and save a child plucked from the sea, but could not revive him.

“It was very upsetting to see a mother and father grieving for their young child, and our personnel tried to resuscitate him but unfortunately there was nothing they could do,” he told journalists at the portside.

Police in white sanitary suits sombrely removed the dead as Red Cross workers and members of the International Organization for Migration (IOM) handed out bottles of water, packs of food and shoes to the survivors.

While the bodies will remain in Palermo to be identified, the living will be transferred to emergency reception shelters across mainland Italy.

Minihane's second in command, Daniel Wall, said he was proud of the crew for having saved so many people in such difficult circumstances.

The Niamh had answered the migrant boat's distress call on Wednesday, stopping about a nautical mile away to launch its rescue vessels.

But as they saw their saviours approach, those in the stricken boat – which was taking on water –  all rushed to one side, causing it to flip over.

As many migrants do not know how to swim, the race was on to save as many people as possible from the blue depths.

Previous tragedies have had a much lower survival rate, with one shipwreck in April leaving 800 feared drowned and only 28 alive.

“Our crew are well prepared for such contingencies and we had prepared a worse case scenario for something like this,” Wall said.

“The crew performed to a very high standard, they were very professional, very well trained and I think we achieved a lot by saving well in excess of 360 people,” he said, while admitting it was “a very tough and intense operation”.

All those who took part in the rescue will receive counselling over the coming days, he said, to ensure they are coping with what they experienced, from men clinging desperately to life-rafts to women pleading with their last breath to be saved.