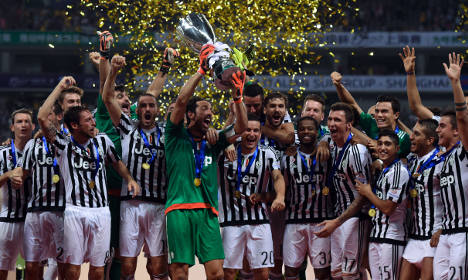 Croatian international striker Mario Mandzukic and Argentine Paulo Dybala, signed this summer for a reported €19 million and €32 million respectively, breached Lazio's net in the second half with two well-taken goals.

Both sides fielded strong sides in a match played in front of a large crowd at 60,000-capacity Shanghai Stadium, but there was little entertainment on offer for much of the evening, save for a half-time performance by a trio of Chinese traditional musicians.

It took until the 26th minute before either goalkeeper was called into action, when Juventus' Stephan Lichtsteiner unleashed a long range shot which flew over the Lazio bar.

The first half was a torrid midfield battle which saw Juventus' Paul Pogba heavily involved in much of the action, but he was unable to create any clear-cut chances for his side.

In the second half, the teams appeared to toil somewhat in the humid 32-degree evening heat. But not long after the restart Pogba again made his presence felt with a spectacular 30-yard drive which flew just wide of Lazio goalkeeper Federico Marchetti's right post.

The deadlock was finally broken in the 69th minute when Mandzukic rose majestically to head home a dangerous cross.

However, Juventus wasted no time in extending their lead, when in the 73rd minute Pogba neatly controlled a high ball and laid it off in the box to Dybala.

The Argentine striker, who joined Juventus from fellow Serie-A side Palermo, then scored by smashing the ball into the net from the middle of the box.

Dybala's emphatic finish killed the game somewhat, and Juventus went on to lift the trophy in a lively ceremony after the final whistle which delighted the club's numerous Chinese supporters cheering on from the stands.

The Italian Super Cup is traditionally the curtain-raising fixture to the country's domestic season and is contested between the reigning league champions and current Italian Cup holders.

In recent years the fixture has been increasingly held outside of Italy, and was hosted in China at the Bird's Nest in Beijing in 2009, 2011 and 2012.