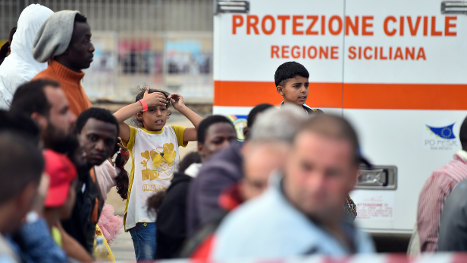 Around 224,000 migrants fleeing war and hunger have arrived in Europe by sea since January. Photo: Gabriel Buoys/AFP

Several inflatable dinghies intercepted on Sunday were so overcrowded they risked capsizing, and one boat was listing badly when it was spotted 137 miles southeast of Sicily.

Croatian navy vessel SB72 Andrija Mohorovicic – which is part of the EU's Triton patrol and rescue operation in the Mediterranean – rushed to the boat's aid, coastguards said.

In total, 671 people – including 48 children and 108 women – were plucked from unseaworthy vessels in five separate rescue operations on Sunday alone.

The Italian patrol boat Diciotti was taking 400 migrants to the Sicilian port of Pozzallo where it was due to dock on Monday morning, while the Croatian vessel was heading for the port of Augusta on the east of the island.

On Saturday more than 400 migrants were picked up mostly off the Libyan coast in operations in which the Doctors Without Borders (MSF) vessel Bourbon Argos also took part, the coastguard said.

Around 224,000 migrants fleeing war and hunger have arrived in Europe by sea since January the UN's refugee agency estimated Thursday – 98,000 to Italy and a further to 124,000 to Greece.

More than 2,100 migrants have died en route so far this year, not counting last week's shipwreck tragedy in which 200 are believed to have perished.