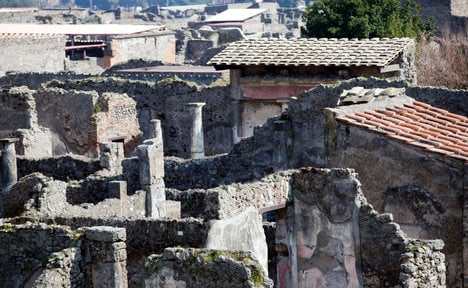 The tile was taken from a roof in the ancient city of Pompeii. Photo Carlo Hermann/AFP

The young tourist decided to take a Roman roof tile from the archaeological site, which he hid in his rucksack in a bid to smuggle it out without getting caught, Il Mattino reported.

But the teenager was spotted lifting the tile by a conscientious American tourist, who informed security staff.

Police stopped him before he could leave the site.

The young thief was charged with attempted theft and handed over to his angry mother, who was unaware that he was up to no good.

But had he known the tile might not have raised enough money for the iPhone – the price of the latest version starts at around €650 – he might have thought twice.

“A simple terracotta tile actually has a very low value, we don't even trade them,” Carole Elena, a dealer in Roman artefacts, told The Local.

“Being a tile from Pompeii, its provenance might have given it some extra value, but I'd say it's worth a maximum of €400… but obviously items like this are priceless in terms of their historical value.”

The tile was given back to experts, but seeing as neither the Dutch nor the American tourist could remember which Roman home, or domus, in Via dell'Abbondanza the tile had come from, it might be a while before it's back in its proper place.

The attempted theft comes a few days after we reported that the ancient city is rising from the ashes again in a happy end to a long, sometimes gruelling restoration saga – despite the worst that Italy's mafia and bureaucracy could throw at it.