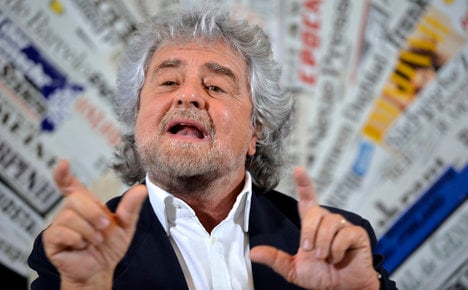 In a TV interview with La7 on Tuesday afternoon, Grillo said: “I am going to withdraw from the movement because I'm very old and I have a large family.”

Grillo has distanced himself from the party recently, with some of its members seen as rising political stars.
Luigi Di Maio, who at 29 is the youngest deputy president of the lower house in Italian history, is quickly becoming the new face of the Five Star Movement.
Read more: Italy's anti-establishment party 'ready to govern'
While Grillo said that he's “here for now” and that “the movement is my life”, he hinted that the party perhaps no longer needed to use his personality as a springboard for media coverage.
“Once people understand that I am not the undisputed leader of M5S, that I am not in charge and that they are not voting for Grillo but for an idea that I have been part of – then I can return to my job, which is making people laugh and showing them things they don't know,” he said.
The Five Star Movement's leader has not yet given any clear indications as to when he will be stepping down. His spokesperson told The Local that the leader has not resigned.
The comedian is working on a new show that he hopes to launch at the end of this year, after delaying it because of political commitments.
A return to TV might also be on the cards. Reports last week suggested he could return to Italy's national broadcaster Rai, but Grillo was uncertain.
“I don't know, I'm open to anything,” he said.