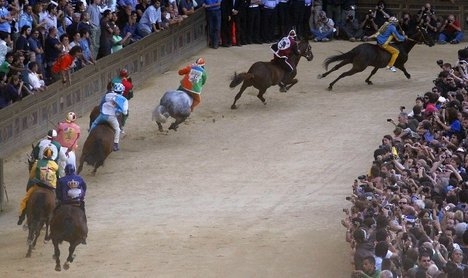 The protest will be the first to take place in Siena during the event. Photo: Fabio Muzzi

The protest has been organized by the Italian extra-parliamentary animal rights group, Partito Animalista Europeo (PAE).

The activists were yesterday granted permission to protest during the second and last race of the year, known as il Palio dell'Assunta, which will be run on August 16th.

The animal rights group was delighted with the permission to organize a protest. PAE President Stefano Fuccelli wrote a note in which he called the decision “a new historical precedent against an event that has previously been seen as untouchable”.

The historic horse race, in which horses representing the 17 suburbs of the city race three times around Siena's central Piazza del Campo, dates back to 1656.

However, in recent years there has been increasing calls for the race to be banned on grounds of animal cruelty.

Since 1970, some 50 horses have died as a result of the Palio. The last Palio death occurred on June 29th this year when the seven-year-old filly Periclea was put down after falling during a heat for the first Palio which took place on July 2nd.

As much as the animal rights group was hailing their right to protest as a historic victory, it will only be allowed to protest at a site that is 6km away from Piazza del Campo.

Nonetheless, according to the Facebook group for the event, “Basta Palio”, some 1.800 people have confirmed that they will attend the protest so far and a further 9,000 have been invited.

Members of the group have left several comments against the Palio, with some calling it “the great shame of Italy”, while supporters of the competition have posted comments in the group in favour of the Palio, branding the protesters “hypocrites”.

With tensions running so high, the prefect of Siena, Renato Saccone, has warned protesters not to create trouble and not to venture into the city centre on the day of the protest.

“The right to protest has been granted,” Saccone told La Repubblica. “But the protest can only be carried out according to strict guidelines and without disturbing public order.”