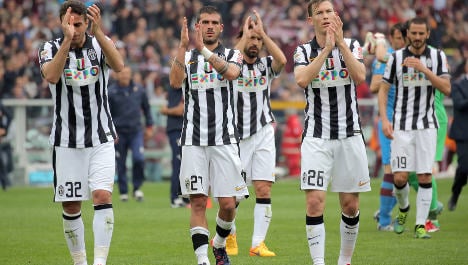 Barely two months after wrapping up one of their most successful seasons to date, Juventus kick off the 2015-2016 campaign at home to Udinese on Sunday looking to take a first step towards a record fifth consecutive Serie A title.

Having steered his side to the cusp of an unprecedented club treble, only to fall to Barcelona in last May's Berlin final, coach Massimiliano Allegri would do well to register a repeat – especially given the movement of key players over the summer.

But Juventus have been quick to plug the gaps, recruiting German midfielder Sami Khedira on a free transfer from Real Madrid and signing both Mario Mandzukic (Atletico Madrid) and Paolo Dybala (Palermo) before the height of the summer transfer period.

If any proof were needed the new team can work together, strikers Mandzukic and Dybala hit one apiece as Juve stunned Lazio 2-0 in Shanghai last week to win the Italian Super Cup.

Allegri, as cautious as ever throughout his first season at the club, repeated his mantra of calling for cal

“We start this season from zero. What we've achieved was great, but it's now in the past. Only with hunger and patience will we manage to repeat it,” he said.

Roma finished runners-up last season but Rudi Garcia's men only did so, claiming the league's second automatic Champions League qualifying spot in the process, by the skin of their teeth.

For the past two seasons the Giallorossi have started their bid for a first league crown since 2001 by snapping at Juve's heels, only to trail off somewhere before actually biting a chunk.

Last season's campaign started with a flourish while the summer sun still shone on the Stadio Olimpico, only to begin to fizz out before the snow in Turin had melted by the end of March.

A seemingly unending run of draws shortly after the winter break was decisive for Garcia's side, and the Frenchman has done well in luring Edin Dzeko and Mohamed Salah to the club on initial loan deals – acquisitions that could make the difference for his stuttering side.

But with French defender Mapou Yanga-Mbiwa having signed for Lyon and Ashley Cole angling to move after a disastrous first season, Roma could start the campaign with holes in their defence.

“The attack and midfield are fine, but I don't have much time to work on the defence as our new arrivals have come in late,” Garcia told Roma TV.

“That's okay though, we did it last year with (Kostas) Manolas and (Jose) Holebas, we'll do it again this year.”

Lazio were strong finishers last season, beating Fiorentina to the Italian Cup and only settling for third place after a thrilling duel with Roma.

Stefano Pioli's men played some cracking football last season, thanks in large part to the pace and goalscoring of Felipe Anderson.

Lazio will join Juventus and Roma in the Champions League group stages if they manage to overcome Bayer Leverkusen over two legs in their play-off on August 18th and 26th.

Doing so would only further underline the recent inadequacies of the once-heralded Milan giants.

Seven-time European champions AC Milan, and Inter – Italy's last treble winners in 2010 – both failed to qualify for Europe last season and so begin their respective campaigns already shouldering the weight of expectation.

Former Sampdoria coach Sinisa Mihajlovic has taken the Rossoneri reigns while Roberto Mancini will begin his second season in what is his second spell at Inter, whom he led to seven titles, including four consecutive Serie A trophies, in his previous spell in charge (2004-2008).